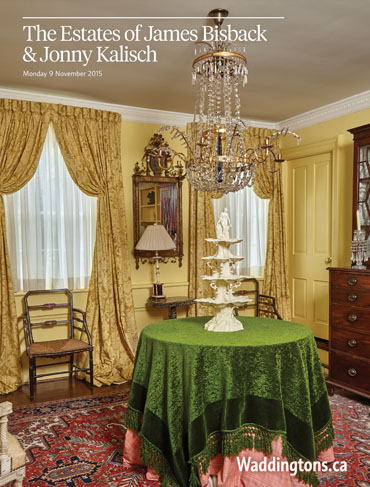 “Where Antique and Unique Meet” is the motto of the village of Shakespeare. It could also be the motto for Jonny Kalisch and James Bisback, owners of Jonnys Antiques.

The partnership of Jonny Kalisch and James Bisback, and their eponymously named antiques store in the storybook town of Shakespeare Ontario, were legendary. Loyal attendees of our auction previews for decades, it was always a pleasure to see them at Waddington’s. Jonny – flamboyant and colourful, often bedecked in Navajo turquoise jewellery, or dressed in lederhosen, and the slightly reserved, more refined James – both immensely liked by all.

The partners came from distinctly different backgrounds: Bisback was from the small, quintessentially Ontario town of Seaforth, and Kalisch immigrated to Canada from Poland, via Germany, Switzerland and England. Their passion for antiques bringing them together in Toronto in 1964. Jonny opened his first shop on Wellesley Street in downtown Toronto; “actually, a bit of junk shop” one former client recalled. But even in the early days Jonny understood how to attract attention, and business. A signature sleigh that would later grace the Shakespeare shop was first placed on the roof of the bay window of his shop on Wellesley. Spotted from a distance, shoppers knew “they had to come in to investigate,” Jonny said. Perhaps that sleigh is what drew James in that day he first walked into Jonny’s shop. The rest, of course, is antiques history.

In 1969 Jonny and James moved to Shakespeare, Ontario, where they would create Canada’s most popular and well-regarded antiques business. In fact Jonny and James would transform Shakespeare itself into the “antiques mecca” of Ontario, drawing customers from across North America and Europe. At one point, Jonny and James owned shops in Shakespeare, Bayfield and Toronto. But it would be Jonnys in the village of Shakespeare, with a population of less than 1,000 people, that would become known as Canada’s great antiques destination.

Described as “a bit like salt and pepper”, Jonny was the entertainer and James was the quiet one who handled the business of buying and researching. Recognized as a connoisseur of 18th and 19th century ceramics, James possessed an astonishing range of interests, and his breadth of knowledge was extraordinary. An inquisitive, passionate and scholarly dealer, he was always generous with his knowledge, as noted by Rosalie Sharp in her 2007 autobiography: “We started collecting (ceramics) in earnest about 1986. It was then I met china maven James Bisback. We share affection for ceramics and for each other. He’s a sweetheart. In February of 1987, Issy and I went out to James’ antique shop in Shakespeare – Jonnys Antiques, named for his partner, Jonny Kalisch. We bought a pile of Spode tulips and James suggested that we might enjoy the Ceramics Fair and Seminar held in England every June. Since then, except for one year, the three of us have attended that fair… James and I prompt each other to buy selected items either for his shop or my collection.”

Avid collector and a Jonnys client since 1970, Clayton Shields recalls that Jonnys was not just a store, but also a place to hang out, perhaps even be treated to some of Jonny’s homemade tomato soup. Friends and collectors gathered when James would come back from a buying trip, everyone eager to see the new acquisitions, knowing there would be something for everyone, and always of the best of quality. (Clayton noted that items he purchased from Jonnys over the years have since been donated to the Winnipeg Art Gallery.) James’ keen eye later extended beyond antiques to discover Inuit art, honing in on the exquisite lines of Kavik, TikTak and others. Soon, Jonnys was also selling Inuit art; stone sculpture displayed in beautiful juxtaposition with the antiques.

A great example of James exacting nature was his quest and acquisition of pieces from two porcelain dessert services bearing views of the journey of Viscount Milton and Dr. Walter Cheadle across British territory in Canada in 1862-1863. Commemorated by the Minton china factory of England, the plates were based on drawings made and photographs taken en route, capturing their adventures of buffalo hunting and crossing the Rockies, the gold rush and Indian guides. It was the historical importance that fuelled James’ search for the plates, “It’s so important to Canada,” James said. “A private commission of the highest quality, this porcelain is probably the most significant ‘Canadian historical china’ in existence.” Following years of research, in 2004 Jonnys cordially invited collectors to an exhibition and sale of “Milton and Cheadle’s Great Adventure”. We have the privilege of offering five plates from the service in this auction.

We are honoured to say a public and very fond farewell to Jonny and James as we present an auction of some of their extraordinary collections.

Jonny Kalisch passed away in April of 2015, just over a year after James Bisback’s passing in 2014, leaving behind legions of fans, friends and clients, and many fond memories of a great Canadian adventure.