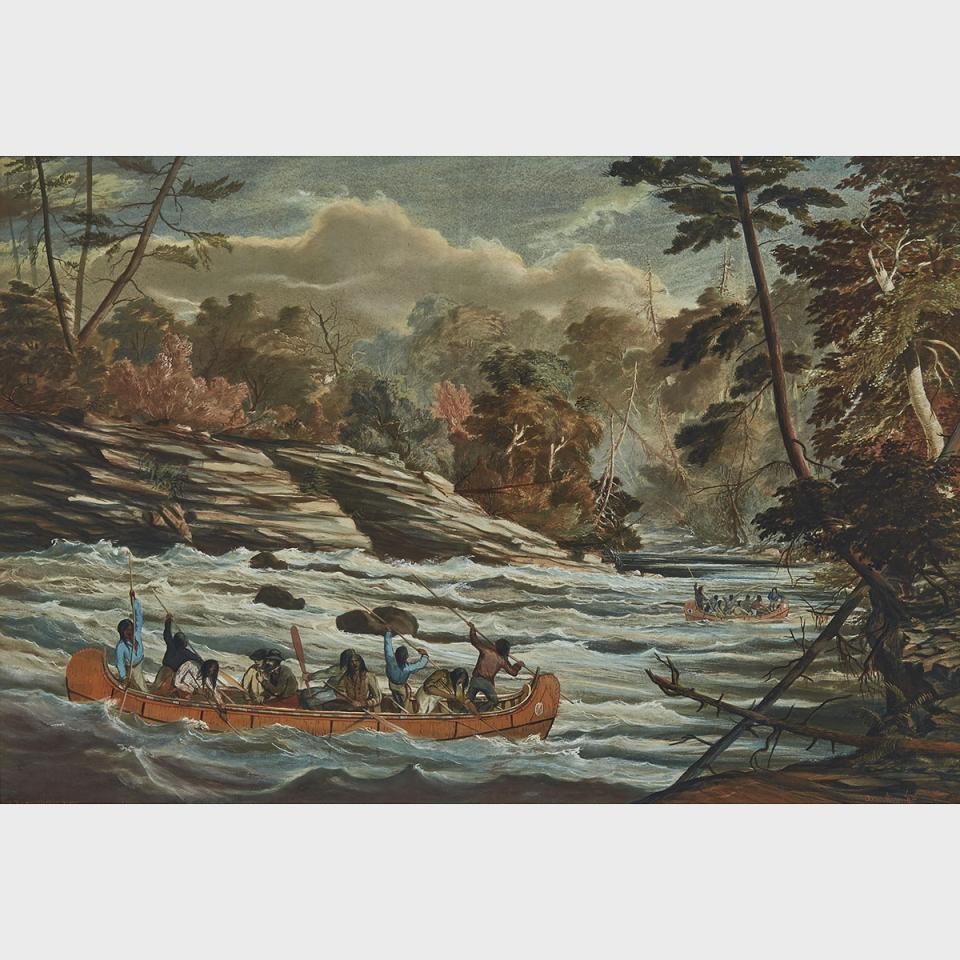 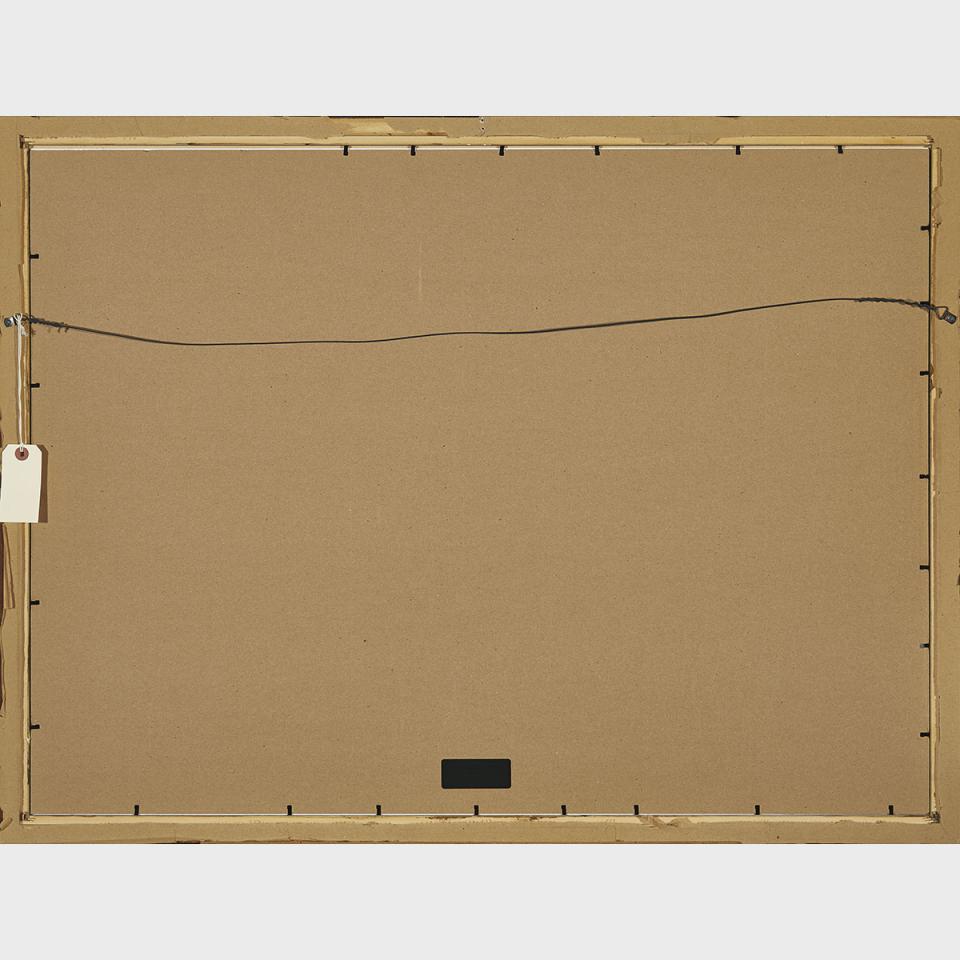 Henry C. Campbell,  Early Days on the Great Lakes: The Art of William Armstrong, McClelland and Stewart Limited, Toronto / Montreal, 1971, pages 125, 105 for a related work and pages 112-122 for this lot, reproduced.

William Armstrong (1822-1914) is among a cadre of painters who in the early days of the development of the country that would become Canada, made record of the indigenous peoples, flora, fauna and, eventually, industry they encountered here.

Many of the earliest watercolourists were itinerant army officers posted overseas for a limited time, tasked with marking territory in order to lay claim to this new land. This first wave of topographical artists had often trained as engineers and had as part of their course of study intense drawing instruction of the kind provided at Woolwich under Paul Sandby. While many also painted for pleasure, their first objective was martial. This first wave included artists such as George Heriot (d. 1839), James Pattison Cockburn (posted to Canada ca. 1822) and James Duncan (d. 1881).

Subsequently, these topographical painters would be replaced by resident watercolourists who were increasingly interested in how the country's resources could be exploited. Scenes of industry - railway, road and bridge building for example - and other records of settlement as well as recreational pursuits, became their primary preoccupation. William Armstrong belonged to this second generation of painters.

A short time before Armstrong emigrated to Canada from Ireland (ca.1851), fellow countryman Paul Kane began travelling about the land recording his impressions of what he sensed, like George Caitlin in the U.S., might be a disappearing nation. He could see that Canada's indigenous people were being severely impacted by European settlement. Kane embarked on his first trip west to explore the Upper Great Lakes in 1845. During the course of his wanderings he, too, painted the region depicted by Armstrong in this lot. In the diary he kept which was published as "Wanderings of an Artist among the Indians of North America" in 1859,  Kane notes in particular the importance of the Kaministiquia River which he regarded as an important depot for trade. Many minerals were found in this area - particularly copper and silver, which created a rush to the area by hopeful prospectors.

Like Armstrong, Kane travelled by canoe along the river and was struck by these remarkable vessels. Kane writes: "These are constructed of the bark of the birch tree, and are about twenty-eight feet long and four or five feet beam (wide), strong and capable of carrying besides the crew of eight men, twenty five pieces (bundles of goods each weighing approximately ninety pounds, packaged to make them easy to remove during portages) but at the same time so light they can be easily carried on the shoulders of two men."

In a facsimile publication of Kane's sketchpad there are drawings of these canoes from various angles, some in graphite only, some picked out in watercolour, including figures paddling and poling through rapids, just like the figures shown here.

The Kaministiquia empties into Lake Superior at Thunder Bay. Its most renowned and awesome feature is Kakabeka Falls which many who have visited claim to be different to but as impressive as the falls at Niagara. The name of the river comes from an Oijbwe word meaning two islands referring to the two large islands at its mouth. The Kaminisitiquia became an important route to western Canada and as a result much industry was located at critical spots along it including sawmills, grain elevators, docks, coal yards and other manifestations of industry that would have appealed to Armstrong, the engineer.

The pictorial documents of artists such as Kane and Armstrong provide both a beautiful and valuable social record of our country particularly during an era which, in hindsight, we view as having imposed draconian government policies on the indigenous peoples. Here, however, we can revel in the thrill experienced by the two settler figures facing left - are they clutching each other? - as they swoosh down the rapids, their crew nonchalantly navigating the chute with paddles and poles. The passengers' vulnerability in contrast to the crew's mastery of the swirling whitewater is pointedly dramatic.  Armstrong distinguishes himself. His engineer's training - and its insistence of accuracy and attention to detail - is resplendently evidenced.

In addition to the Indian encampments with which he is popularly associated, Armstrong painted many scenes in and around Toronto and was exceptionally fond of yacht racing. He was a member of the RCYC and recorded a number of legendary regattas that took place on Lake Ontario. His portraits of winning vessels are highly prized by collectors. Armstrong's first trip west was in 1859. In 1863, Armstrong acquired 120 acres of land with mineral rights on the Kaministiquia River. This work is indistinctly dated, however the consensus is that it was likely painted around the time of Armstrong's purchase of this land. Armstrong spent much time travelling the Great Lakes by steamer and was painting in Sault Ste. Marie by 1868. In 1870, he accompanied the Wolsely expedition (sent to quell the Red River Uprising) in 1870/71. The painting may, alternatively, have been executed at that time.