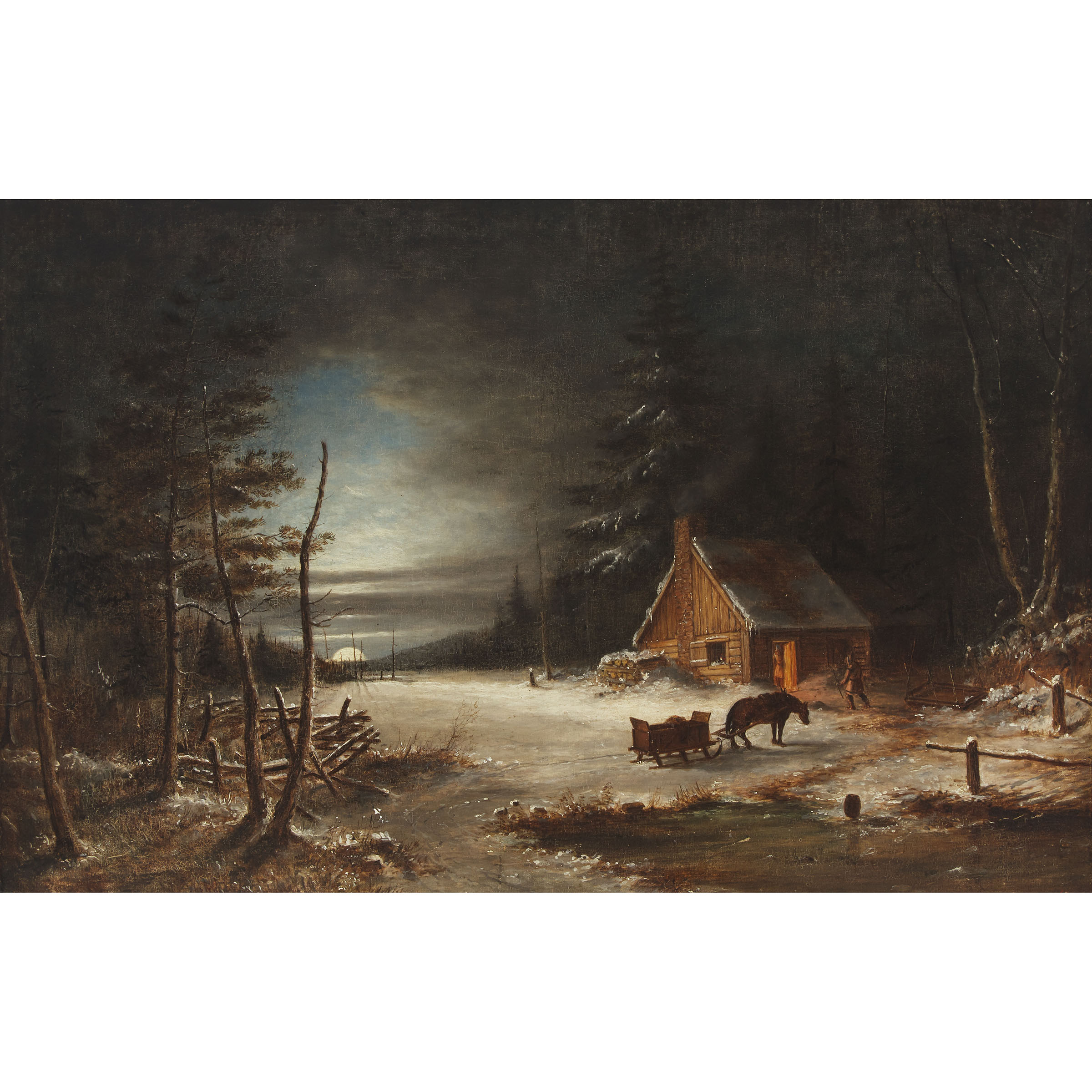 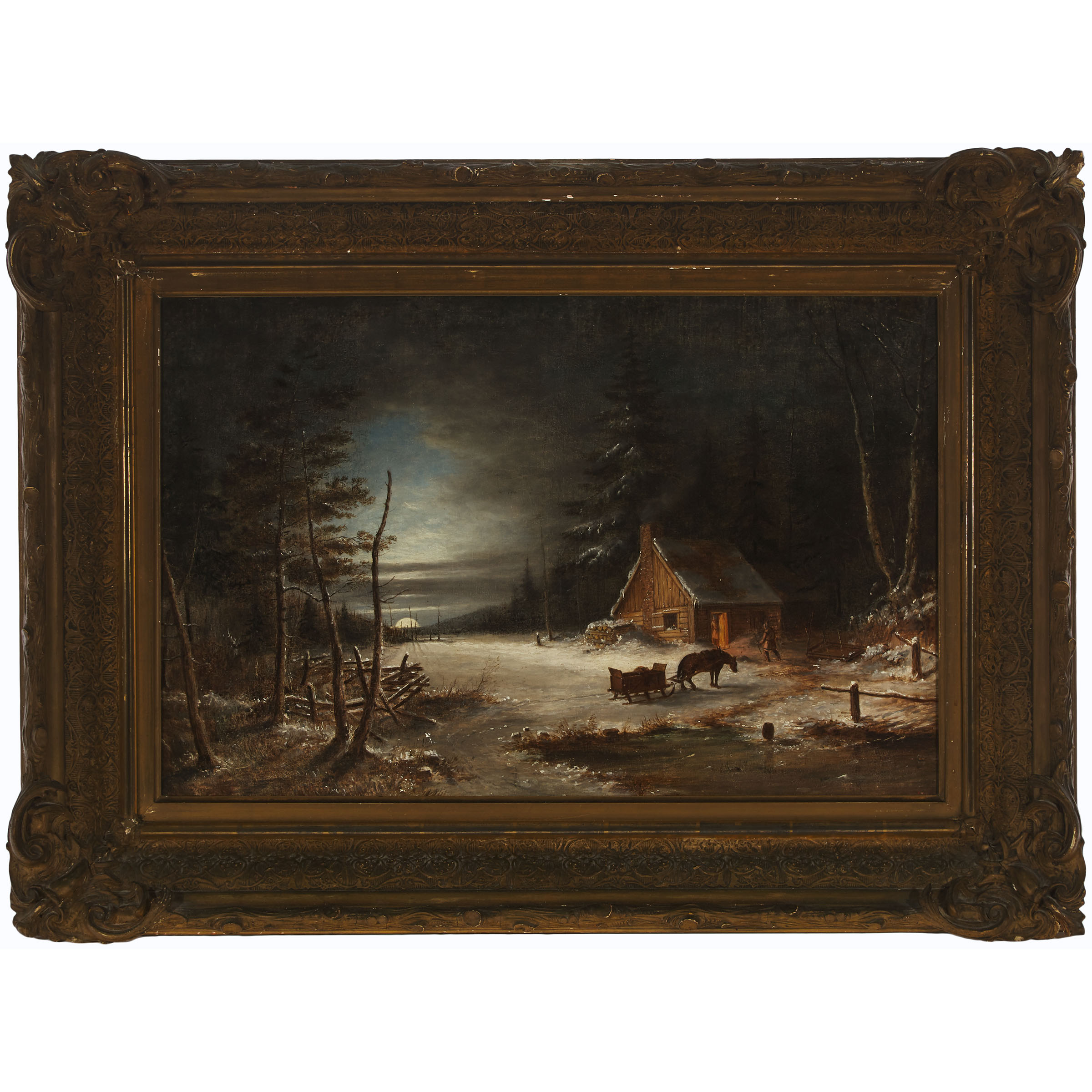 For the first time in nearly a century, an exceptionally rare winter landscape in nighttime by Cornelius Krieghoff has left its distinguished family collection. Fresh to market, Moonlight echoes Krieghoff’s majestic 1851 masterpiece, White Horse Inn by Moonlight, held in the collection of the National Gallery of Canada, with its full moon rising over a snow-covered landscape, accentuating heaven and earth with dramatic chiaroscuro. Each edifice in the paintings’ frigid landscapes offers a welcome haven to settlers on the road and to Krieghoff’s clientele attuned to picturesque details.

Seventeenth-century northern Caravaggesque landscape paintings like those of Adam Elsheimer flowed into early Romantic expression, to become the foundation for Moonlight. This foundation was laid with the knowledge of historical and contemporary European painting Krieghoff had gained at first-hand on a study trip to Europe in 1844-1846 where he made copies after historic artists and contemporaries such as Curtius Grolig, whose marine night-piece was copied by Krieghoff and influenced these paintings. While moonlit scenes became common in Canada at the society exhibitions late in the nineteenth-century, Krieghoff is to be credited for making this type of image part of Canadian iconography a generation earlier. Works like Moonlight presage the tonal moonlit nocturnes by James McNeill Whistler, and made part of Canadian art history by Maurice Cullen and Clarence Gagnon in the late 19th and early 20th century.

Moonlight was, speculatively, painted around 1855: that is, in the moment of White Horse Inn by Moonlight, and the time of Krieghoff’s move from Montréal to Québec City. At that point, Krieghoff was exhibiting in New York and Philadelphia, won the first prize for oil painting in the 1854 Provincial Exhibition in Quebec City, and had ambitions to paint a panorama of Canada. As his professional ambition expanded, Krieghoff’s framing of the landscape also expanded. His paintings became more enveloping, evocative and compositionally sophisticated, as seen in Moonlight, The Passing Storm, Saint-Férréol (1854) in the National Gallery of Canada, and the Thomson Collection’s After the Ball, Chez Jolifou (1856).

From forgeries in his lifetime to Kent Monkman’s pastiches in ours, Krieghoff’s art has been a vital presence in the history of Canadian art since the late 19th century. He remains relevant as a key figure in the understanding and constant renewal of its history. A century before Moonlight entered Waddington’s saleroom, it hung on the walls of 24 Sussex Drive, when it was a private residence. Its owner, William Cameron Edwards, was a captain of the eastern Ontario lumber industry, a member of Parliament, and then a senator until his death in 1921. He owned multiple Krieghoffs, as did his sister-in-law, and Canada’s first female senator, Cairine Reay Wilson. After Edwards’ death, Moonlight was acquired in 1923 from his estate sale by his brother-in-law, Reginald Clarence Wilson. From Wilson, the painting passed down to its consignors, to Waddington’s, and is on offer for the first time since Mackenzie King was in his first term as Prime Minister.

Gregory Humeniuk is an independent art historian, writer and curator who has researched and published aspects of Canadian and international art from the mid-nineteenth century to the present, as well as cultural policy and governance. Through fifteen years at the Art Gallery of Ontario he dealt with Canadian and European historical, modern, and contemporary art. We thank him for contributing this essay

The work is in good condition with minor condition issues, commensurate with age. Please contact us for a detailed report.