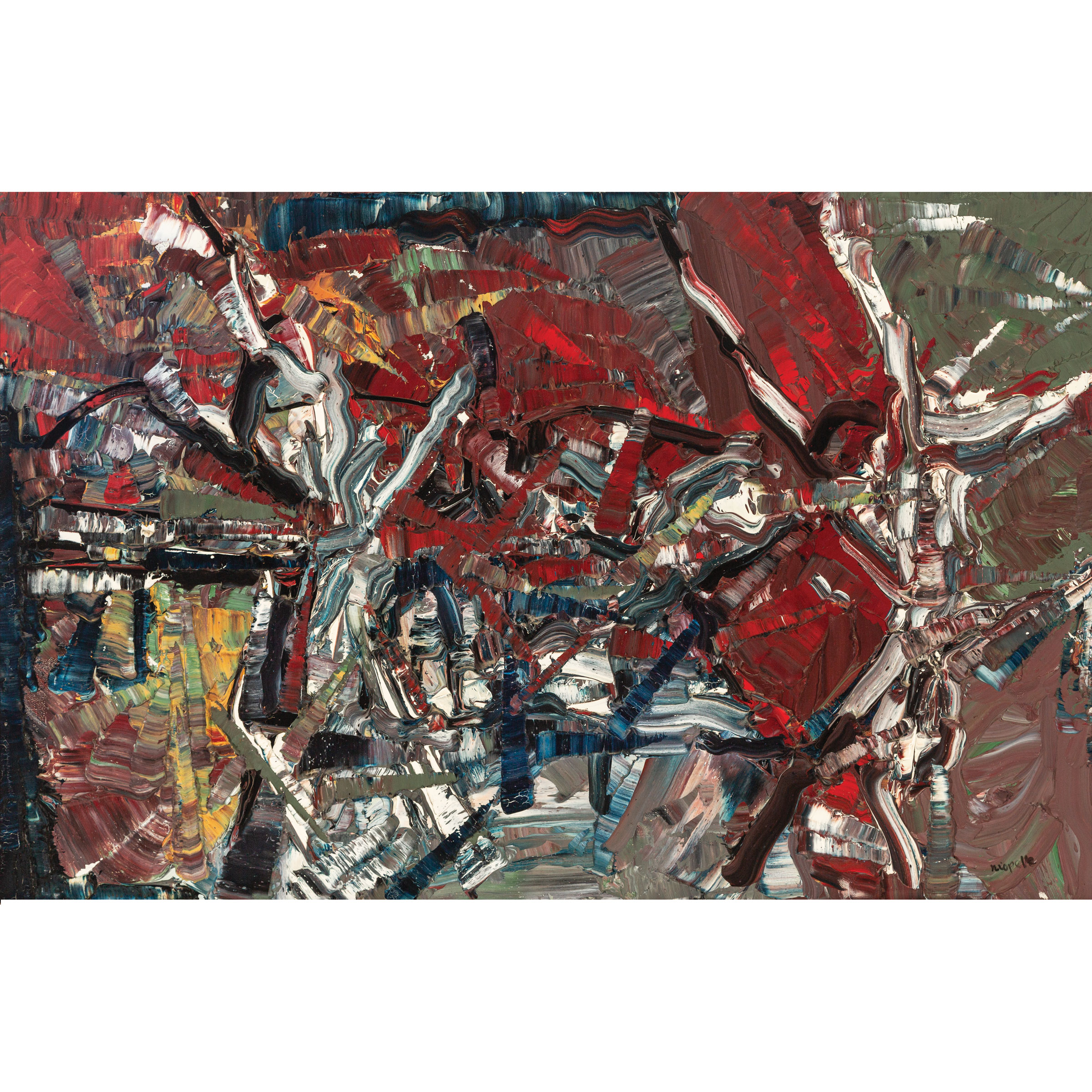 This work is included as an addendum in Jean Paul Riopelle: catalogue raisonné by Yseult Riopelle., cat. #1966.068H. A certificate of authenticity also accompanies this lot.

Sans Titre is representative of Riopelle’s mastery of the palette knife technique in the 1960s, when this piece was produced. At the time, Riopelle was moving away from the large, densely painted canvases characteristic of his work in the 1950s, favouring smaller, more open compositions. We are able to enjoy the deliberate spaciousness and freer configuration of these later gestures in comparison to the mosaic works from the 1950s. Where earlier works were characterized by a diffuse all-over approach, here the composition is more controlled, the distinction between ground and figure made more apparent.

The essence of the work is contained in the central organization of the canvas. Warm purple tones and yellow-greens cut through with overlapping branches of icy whites and crackling blue-blacks. Darker colours impede from the corners of the work, bounding and containing the center: heavy violets and earthy forest greens on the right, with knife-edge black cuts through a daubed harlequin haze on the left. Bursts of red erupt from the upper corner and smoulder through the foreground, upheaving the central mass of colour with dramatic, almost sculptural movement. This effect is heightened by the use of gloss varnish, mixed in with the paint, creating a play of matte and shine across the surface of the work.

Sans Titre was produced at a time when Riopelle was solidifying his reputation outside Canada as an important voice in modern abstract painting. He represented Canada at the Venice Biennale in 1962, was offered the first solo exhibition by Pierre Mattise in New York, and was included at an exhibition of Canadian artists at the Galeries nationales du Grand Palais in Paris in 1968. He received a retrospective at the National Gallery of Canada in 1963, and at the Musée du Québec in 1967.

Waddington’s is proud to provide this timely offering following a recent announcement by the newly formed Jean Paul Riopelle Foundation in their commitment to further national and international awareness about the Artist in advance of his centenary, in 2023.

By descent to Private Collection, Ontario