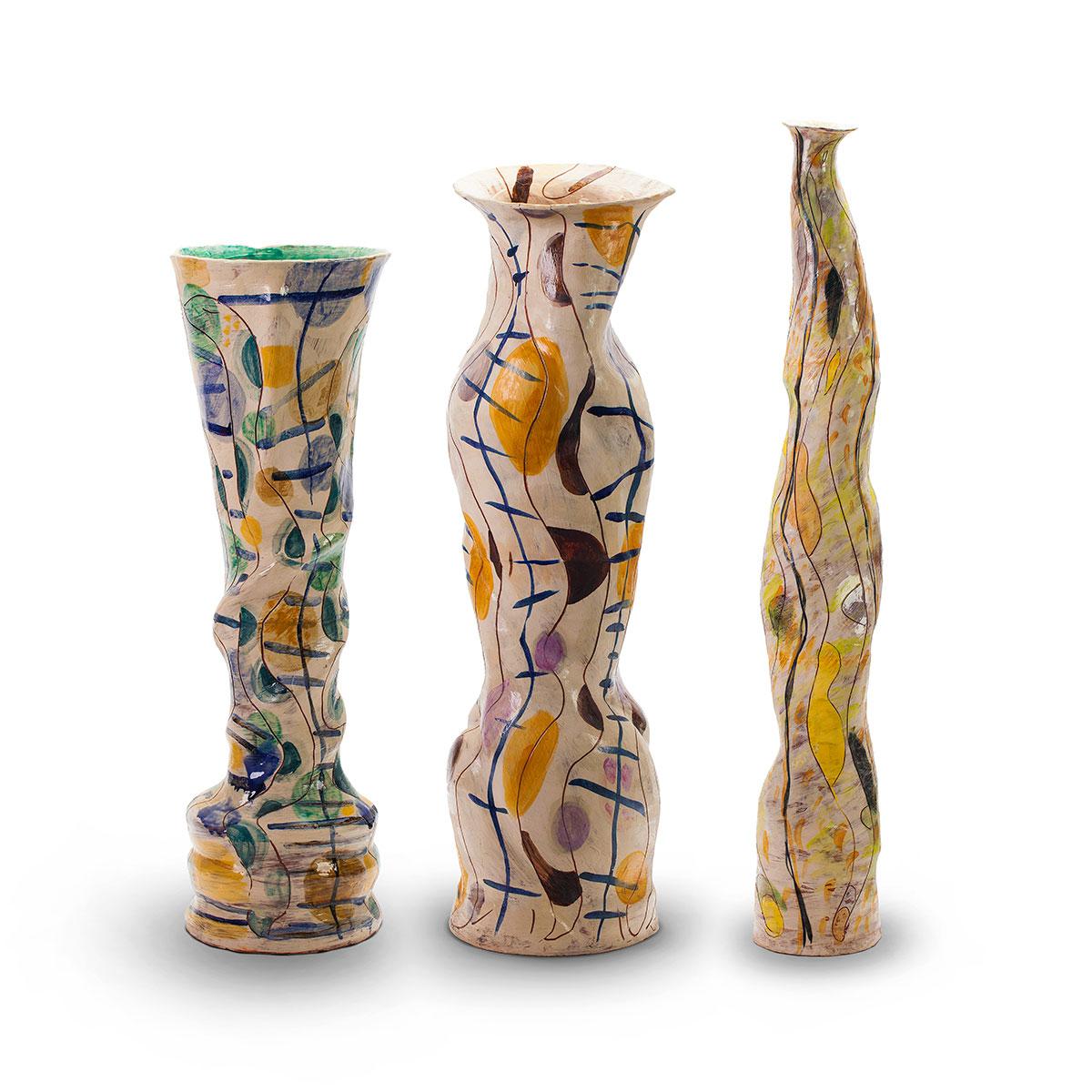 BLUE ONE; YELLOW ONE; WHITE ONE

It would make me so happy if my enjoyment in the process of making my sculptures and other clay pieces was sensed by those viewing the work”.

Mimi Cabri is one of Canada’s most celebrated ceramic artists. She has been a creative driving force in her art since her arrival to Canada in the early 1960’s. She was elected to the Royal Canadian Academy of Arts in 20023.

Mimi Cabri was born in Johannesburg, South Africa. She studied painting and drawing in Johannesburg and in Paris, and immigrated to Canada in the 1960‘s. It was in Montreal, Quebec, that the material of clay captivated her when a fellow artist brought her to the Potters Club, now the Visual Arts Center. She realized that it was her experience as a painter that gave an impetus for clay work and sculpture. She began her professional career as a ceramic artist in 1973 since participating in the founding of the Ottawa Potters Guild in 1973.

Cabri’s early work was in stoneware, with her first solo show at the Flora Street Gallery in the mid 1970s. She recalls the moment when she changed from stoneware to earthenware after a visit to Paris in 1986, upon seeing the “intoxicating” colours in the stained glass windows of Paris’ Notre Dame Cathedral. Cabri has ever since incorporated rich hues in her work as she explores themes that celebrate dance, song and a mythic fusion of human and animal worlds.

Cabri’s work is found in the collections of the Canadian Museum of Civilisation, the City of Ottawa’s Fine Art Collection, The Canada Council Art Bank. She, along with Jill Elder, was the winner or the City of Ottawa’s Heritage Champagne Bath Art Renovation, and was inducted into the Royal Canadian Academy of Arts in 2003. Cabri was commissioned to create portraits on clay of the previous thirty recipients of the Saidye Bronfman Awards for their 30th Awards Ceremony in 2006. These works were on display at the Lafrenière and Pai Gallery in Ottawa. She has also made a series of hand-painted ceramic tile signs for several libraries and learning centers in Ghana.