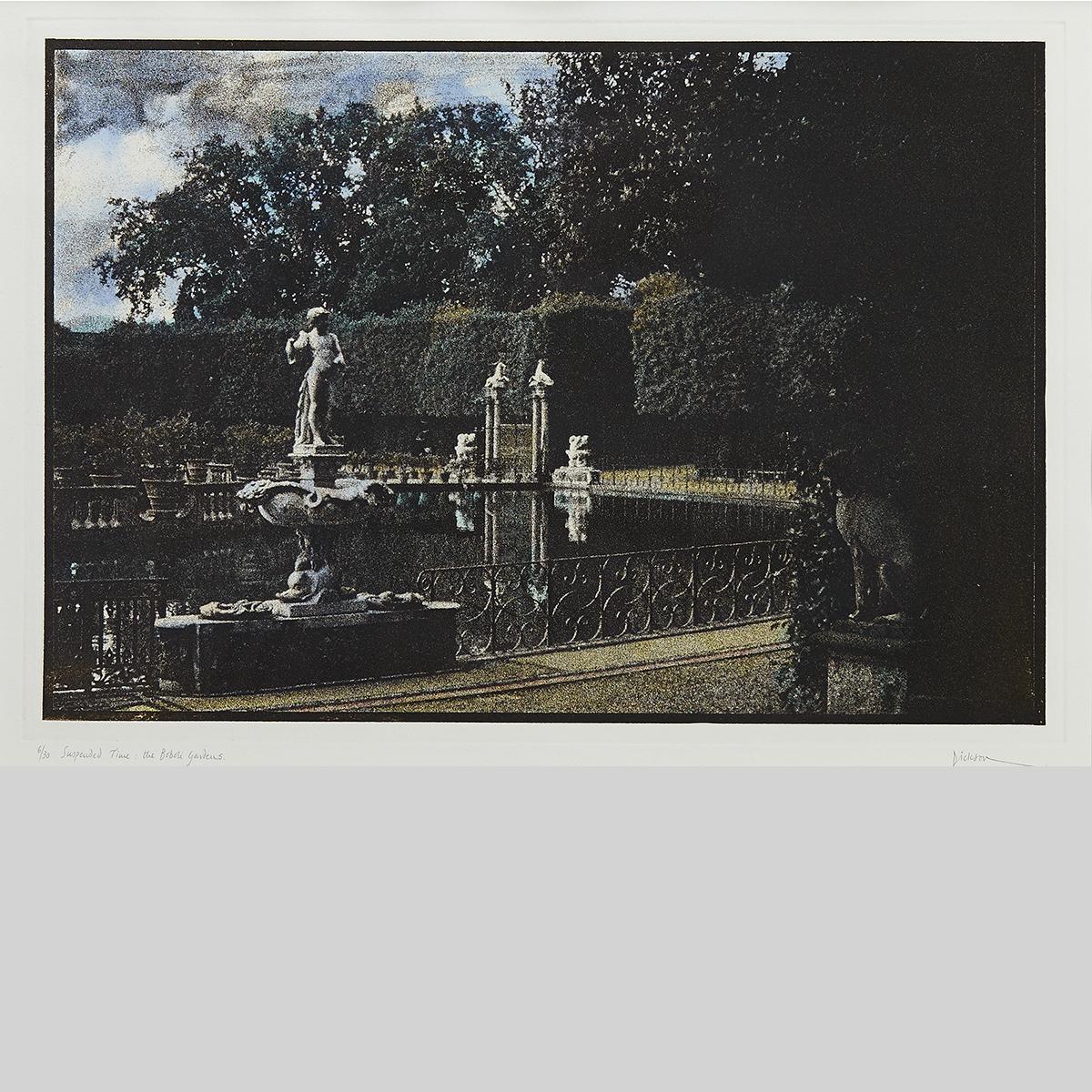 Jennifer Dickson was born in Piet Retief, the Republic of South Africa, in 1936. With her mother’s moral and financial support (her father believed in traditional homemakers’ roles for his four daughters), she went to England where she studied painting and printmaking at Goldsmith’s College School of Art (University of London, England) from 1954 to 1959. From1960 to 1965, on a French Government scholarship, she was an associate of the prestigious graphic workshop, Atelier 17 in Paris, working with Stanley William Hayter. Hayter imparted upon Dickson an analytical rather than emotional approach to her work, as well as the importance of risk taking to discover new forms of expressions and techniques. She went on to found and direct the graduate printmaking program at Brighton College of Art (now Brighton University), where she was instrumental in integrating photography into the program. By this point in her career, Dickson had already established an international reputation: Her etchings were published in a number of major thematic suites. In 1963, she was awarded the Prix des Jeunes Artistes pour Gravure at the Biennial de Paris, and her work, Genesis, was exhibited in the Prizewinners Salon of the Biennale de Paris in 1965.

Dickson immigrated to Canada in 1969 where she directed the Graphics program at the Saidye Bronfman Center in Montreal (1970-71, 1981), and taught Drawing at Concordia University.

Since 1962, Dickson has had more than 60 solo exhibitions in six countries and has participated in more than 400 group exhibitions. Some of her more renowned exhibits include The Secret Garden (1975), Three Mirrors to Narcissus (1979), Sanctuary: A Landscape of the Mind (2005), which ran at the Royal Academy of Arts in London, England, and The Gods (2006), now part of the permanent collection at the Canadian Museum of Contemporary Photography.

Dickson was elected to the Royal Academy of Arts, London, England in 1970, the only Canadian in the 200-year history of this prestigious institution to have been so honored. Dickson was named to the Order of Canada (CM) in 1995, and was awarded an honorary doctorate (LLD) in 1988 by the University of Alberta, Edmonton. In 2002, she was given the Victor Tolgesy Award for cultural leadership by the Council for the Arts in Ottawa. Also in that year, the National Archives of Canada established the Jennifer Dickson Fonds; the collection will eventually hold all of Dickson’s original photographic material. Dickson lives and works in Ottawa, Ontario.