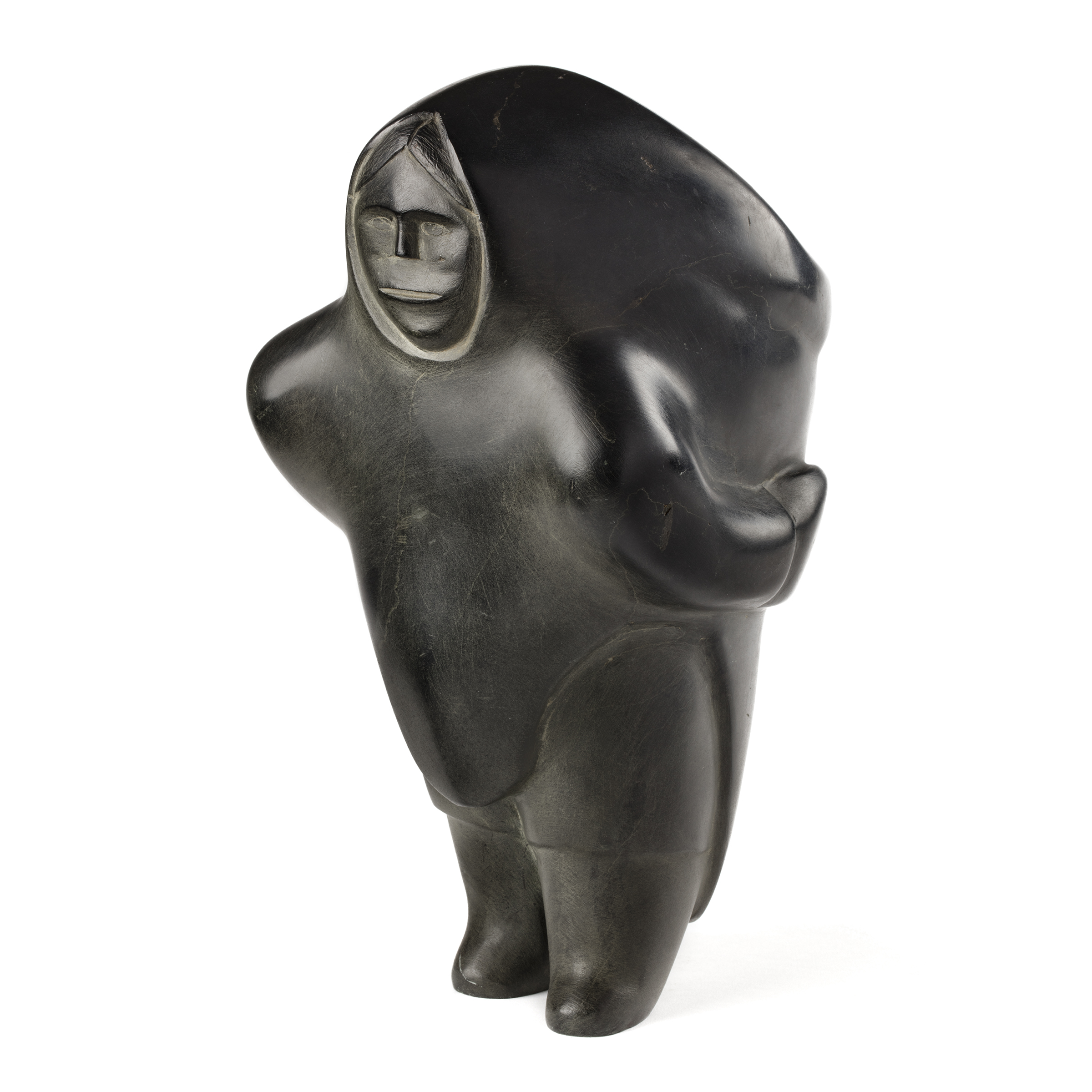 WOMAN WITH A CHILD IN HER POUCH

Tatanniq could be considered the “elder statesman” of Baker Lake sculpture. Furthermore his inclusion in Norman Zepp’s Pure Vision catalogue cemented his reputation as one of the most important sculptors in the Kivalliq (Keewatin) region. Tatanniq is renowned for his beautiful depictions of animals, especially muskoxen, but it is his important representations of human subjects that have reached the heights of the sublime. We think especially of works such as Mother and Child of 1970, Fox Woman of 1970, and Woman of 1973 (see Zepp); his Mother and Two Children (Walker’s Nov. 2013); and another Fox Woman (Walker’s May 2016).

Tatanniq began carving in the early 1960s and reached the height of his powers in the early 1970s. He helped to create the Baker Lake sculptural aesthetic but stood slightly apart from its mainstream as well; Tatanniq’s works tend to be more crisply carved, smaller and less massive, and quieter in tone than works by many of his colleagues.

Woman with a Child in her Pouch is one of Tatanniq’s most gorgeous depictions of Inuit womanhood, one of his larger depictions of single figures. The woman leans slightly forward as she puts her hands back to adjust the weight of the child asleep in her rear pouch. It is clear that she is carrying a toddler not an infant, if the size of the bulge at her back is any indication, so the weight is probably considerable. The overall form of the work is bulky but not ponderous; in fact the composition is elegantly balanced on quite small feet. The mother’s voluminous amautiq is depicted as a series of large, sensuous volumes, with particular emphasis on the parka’s capacious hood and pouch. The woman’s exquisite, serene face is crisply and delicately carved and subtly incised. And as with the greatest of Baker Lake sculptures, the surface treatment of the stone is marvellous; the surface has been brought to a satin sheen yet still reveals the marks of fine sandpaper. Baker Lake sculpture does not get any better than this.