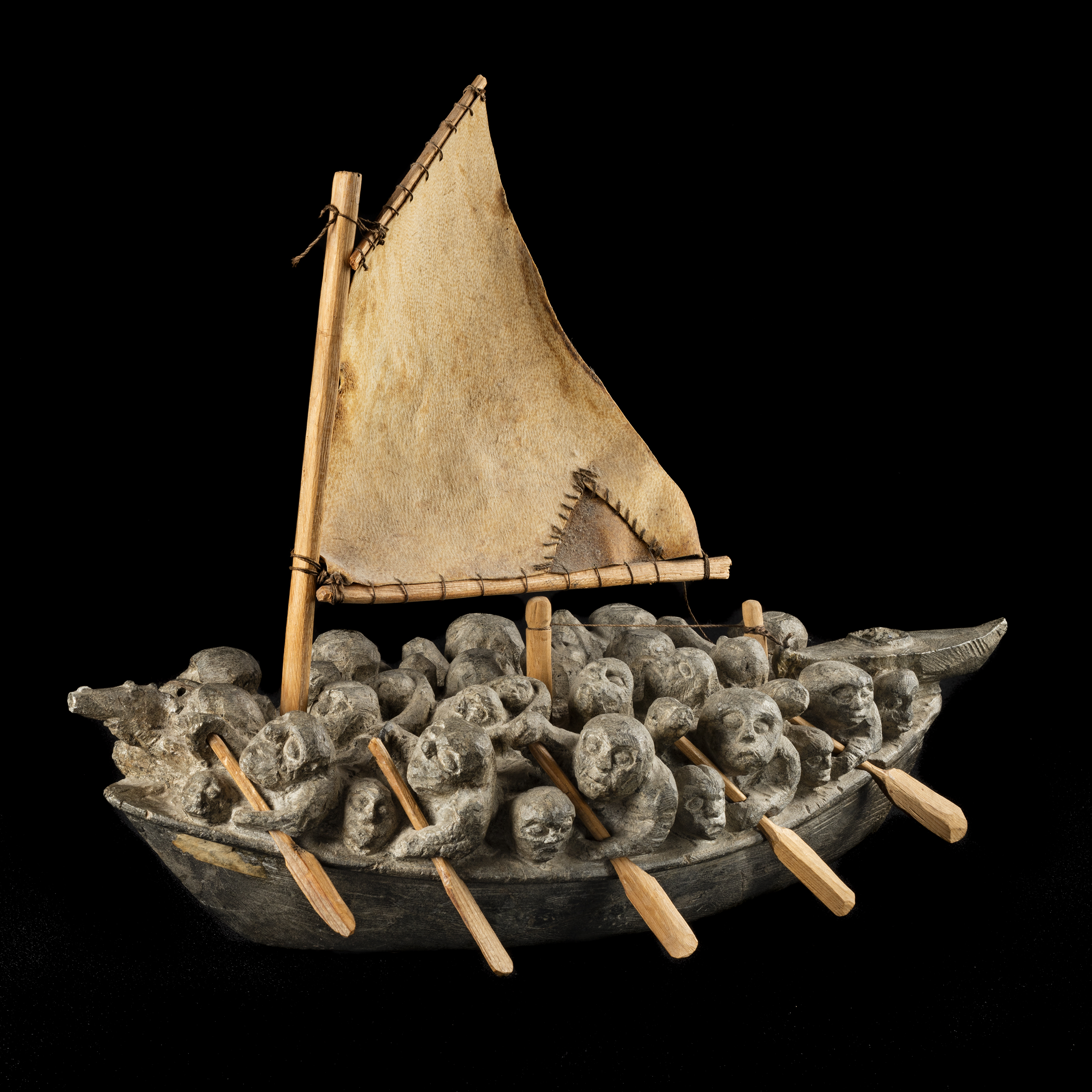 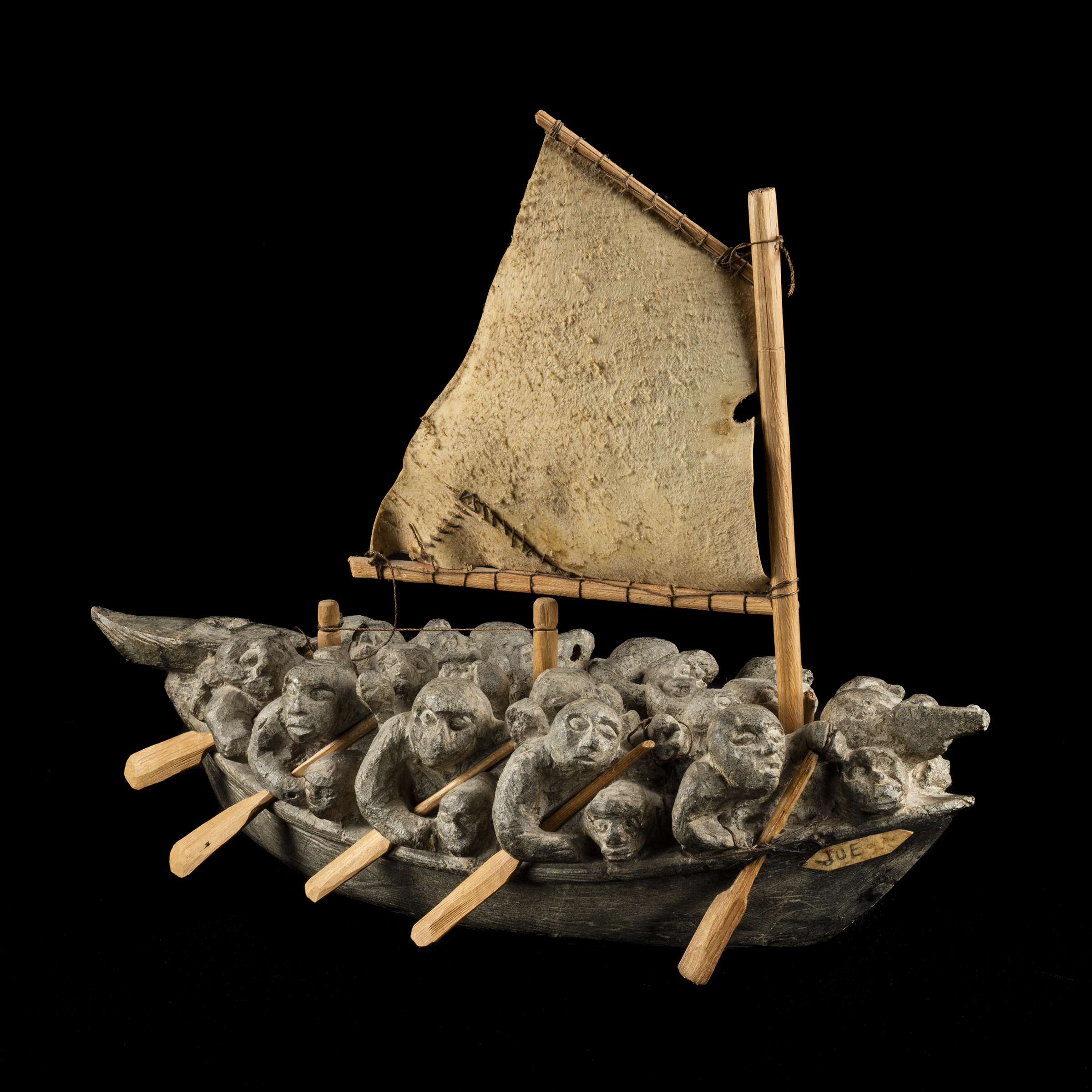 For a written version of Talirunili’s adventure see John D. Furneaux, “The desperate journey behind an Eskimo sculpture” in M22 (Autumn 1974), pp. 20-23, published by the Montreal Museum of Fine Arts. Furneaux had been Joe Talirunili’s friend since 1960 and commissioned the artist to carve a Migration Boat for him in 1964. An edited version of the article can also be found in the Walker’s May 2014 catalogue.

Joe Talirunili, arguably the most celebrated artist in the region of Nunavik (Arctic Quebec), began carving in 1950, one of the first Puvirnituq hunters to respond to James Houston’s encouragement. A selection of his earliest known carvings is featured in Darlene Wight’s Early Masters catalogue (WAG, 2006), pp. 108-111. His first depictions of the Migration appeared in 1964, in both sculptures and stonecut prints. Although not a legend but actually a true tale of catastrophe, marine adventure and survival that involved thirteen families including Joe’s own, the story attained mythic proportions in the artist’s life and work. Joe regularly carved hunters, women, and owls as well as a few other subjects, but it is his Migration series that has quite rightly captured the public’s imagination.

Each Migration Boat is essentially unique, with its particular shape and size, style, and cast of characters. Perhaps according to Joe’s shifting memory of the event, the number of travelers varies from the low twenties to the low forties. Joe carved perhaps two-dozen versions of the Migration over about a dozen years. See the references for illustrations of Migration Boats in various public collections. Several late versions are illustrated in Marybelle Myers’ book Joe Talirunili: “a grace beyond the reach of art.” These all date from late in the artist’s career; Talirunili spent the last two years of his life in working at a feverish pace, carving print blocks and dozens of sculptures, including several versions of the Migration and other marine adventures.

As he grew older, Joe’s style had grown increasingly rustic in nature. Based on its style we are dating this Migration Boat to the early-mid 1970s, in other words within striking distance of the end of the artist’s life and career. This version in particular captures the psychological and physical intensity of the ordeal suffered by Talirunili and his small community. The sculpture’s expressionistic carving style suits the makeshift quality of the umiaq itself; the figures and faces powerfully communicate the panic of the families on board as they struggle for their very survival.

This Migration Boat is special not only for the emotional impact of its carving style but also for the unique combination of certain features and elements found here and there in various other versions. The skin sail has a patch similar to the CMH version – while this could be simply a patch on the skin he used for the sculpture, it might represent a repair made to the original sail. The rifle depicts an important supernatural episode near the end of Joe’s story, in which the female shaman Aullajuk instructs two men to shoot at the island so that the boat can land (because the island kept receding as they struggled to approach it), as can be seen in the Klamer and other versions. The kayak at the rear of the umiaq is a rare element. The labels used for the artist’s signature are found on several versions including the Sarick example. The two instances of Talirunili’s charming folk-art style “native repairs” of broken stone by means of twine or thread are rare in his boats but are found in several of his smaller sculptures. And perhaps the most important feature of this version is the depiction of three women with infants in their amautiq hoods; the inclusion of even one such mother is very rare in Talirunili’s Migrations. And finally – although we admit that this is speculation – we cannot help wondering if the small child peeking out from the port bow is not a portrait of the young Joe Talirunili himself.

All in all, this spectacular and poignant sculpture is a rare and highly important version of the most iconic series of sculptures in Inuit art.