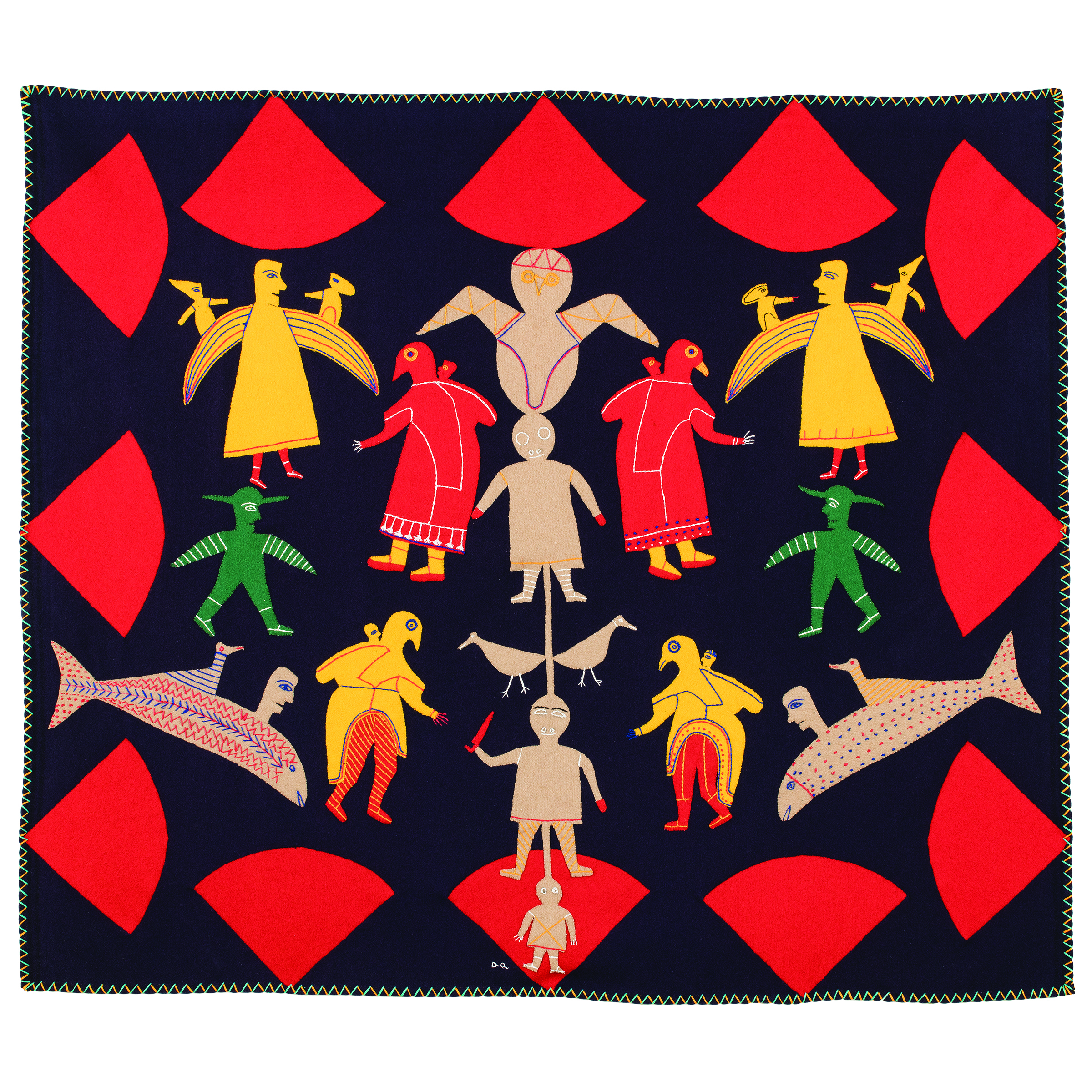 Jessie Oonark is the most celebrated Baker Lake artist, a recognized genius in both the graphic and textile arts. Her drawings, prints and wall hangings can be found in virtually every major public and private collection of Inuit art in the world and have been published extensively. Her largest hanging (373 x 601 cm), an untitled work from 1972-73, hangs in the foyer of the National Arts Centre in Ottawa.

This highly important untitled hanging from c. 1970 is a key work in understanding Oonark’s transition away from narrative works (typically illustrating hunting and traditional camp life), towards more structured (and often quite large) works often displaying spiritual and symbolic imagery. Interestingly, we have found no published examples from this same short period – perhaps 12-18 months – that correspond exactly in terms of both style and imagery. Two hangings in the WAG catalogue (cats. 39 and 41) come close (but not in imagery) and are almost the same size. In other words this year was Oonark’s fulcrum: her time for rapid experimentation and a veritable explosion of creativity.

We know that Oonark was experimenting with images of bird-people as early as 1967-68, as can be seen in one of her small notebook drawings (see Blodgett and Bouchard, WAG, 1986, cat. 19), and the 1968 print drawing for Dream of the Bird Woman (ibid. cat. 25); the print of the same name was published in 1970. In an unpublished 1983 interview with Marion Jackson, Oonark identified the Bird Woman in the 1970 print as the bird-wife of the wandering hero Qiviuq, with two of her children. (A 1970 hanging in the Sarick Collection at the AGO includes very similar fish-bird-human imagery; see ccca.concordia.ca.)

Untitled (Spirit Figures) is a brilliant synthesis of Oonark’s new found sense of design (incorporating an emerging symmetry and the balancing and interplay of colours and shapes) and imagery (incorporating shamanic and transformation imagery as well as the symbolism of the ulu form). We cannot think of another of her major works that focuses so heavily on bird-human imagery; these hybrid figures (particularly the bird-mothers) are as charming as they are poetic. Untitled (Spirit Figures) also has a spontaneity that in later textile works by Oonark – as brilliant as they are – is subsumed somewhat into a more hieratic sense of order. A jewel.