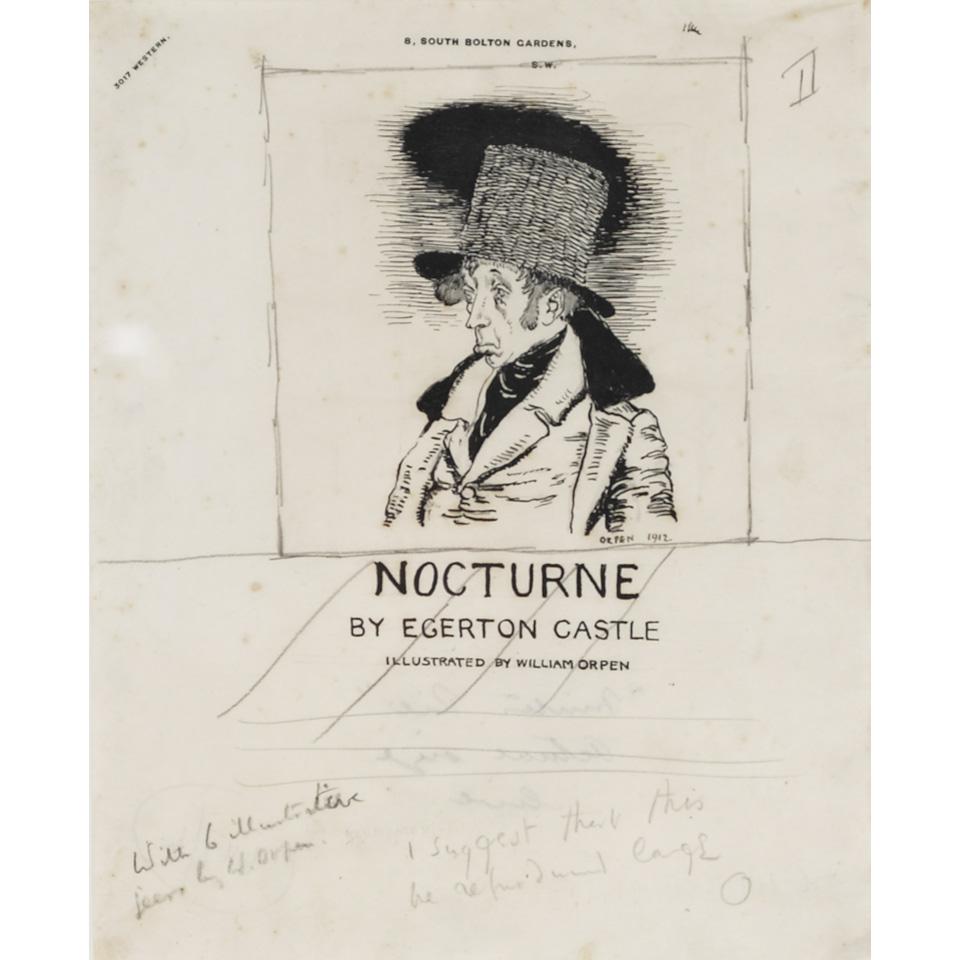 Pencil, pen and ink drawing with ink wash on tissue paper; signed and dated 1912 lower right with lettering: “Nocturne By Egerton Castle” and annotations: “With 6 illustrations jeers by W. Orpen: I suggest that this be reproduced large” in pencil along the bottom on letterhead paper, with number “II” in pencil upper right with the address: “8, South Bolton Gardens S.W. 3017 Western”, annotated “Mister Pie/Actual size live” in pencil verso
Sheet 10.25" x 8.25" — 26 x 21 cm.

This is an annotated printer’s proof drawing intended as one of five illustrations to the short story “Nocturne” by Egerton Castle for publication in “Printer’s Pie”, published at the Offices of “The Sphere” and “The Tatler”, London, 1912, edited by W. Hugh Spottiswoode, pp. 2-6.
It is clear that the origin for the original title given this work (Mister Pie) is a reference to the publication for which it was intended (Printer’s Pie) an annual magazine produced for the benefit of various charities associated with printers, writers and artists. It was edited by W. Hugh Spottiswoode, of Eyre and Spottiswoode publishers, who had been painted by Orpen along with his son Master R. Andrew Spottiswoode in 1909.

Orpen has used his own image as a template for the lead character in the short gothic tale by Egerton Castle, one Theodore, who is haunted by an entity that strikes him with fear and trepidation; a demon tempting suicide. The title and preface suggests that the story may owe its origins to Ernst Theodor Wilhelm Hoffmann (24 January 1776–25 June 1822), better known by his pen name E.T.A. Hoffmann (Ernst Theodor Amadeus Hoffmann), who was a German Romantic author of fantasy and horror, a jurist, composer, music critic, draftsman and caricaturist and the subject and hero of Jacques Offenbach's famous, but fictional, opera “The Tales of Hoffmann.”

Nocturne: A fragment supposed by some critics to have formed part of the papers of the Serapion Club, and to be from the pen of E.T.A. Hoffmann himself (or if not, from from that of Adalbert von Chamisso) and contributed by Egerton Castle with illustrative jeers by William Orpen.

Castle: by choosing the name Theodore as his principal, he may have been making a reference to Hoffmann, one of whose middle names was Theodor.

In using himself as the model, it seems that Orpen is identifying himself with Theodore in his dejected state. He has distorted his features to make himself look more ugly, more wretched. This apparent self-loathing, which reflects an aspect of the artist’s own personality, is a recurring feature in his work especially about this time. He emulated “Mister Pie” on at least two occasions in 1912, and also exaggerated his self-convinced ugliness – the same protruding lower lip – in a number of self portraits, such as The Dead Ptarmigan (1909) (National Gallery of Ireland, Dublin), and The Jockey (Collection National Museum, Stckholm, Sweden) and Engaged (1912) (Cleveland Museum of Art).

Orpen was a great student of the Old Masters and held Francisco José de Goya y Lucientes (1746–1828) in high regard, particularly after a visit he made to the Prado, Madrid in 1904 with Hugh Lane. In the character of Mister Pie Orpen relates his demons to those of Goya and Theodore.

It is to Goya who Orpen turns in his attempt to portray Theodore and give an indication of his mood. He chooses to base his main illustration on one of Goya’s etchings from Los Caprichos (1799), a Self Portrait – Bad Humour or Contempt.

We are grateful to Christopher Pearson of The Orpen Research Project for providing this detailed essay.