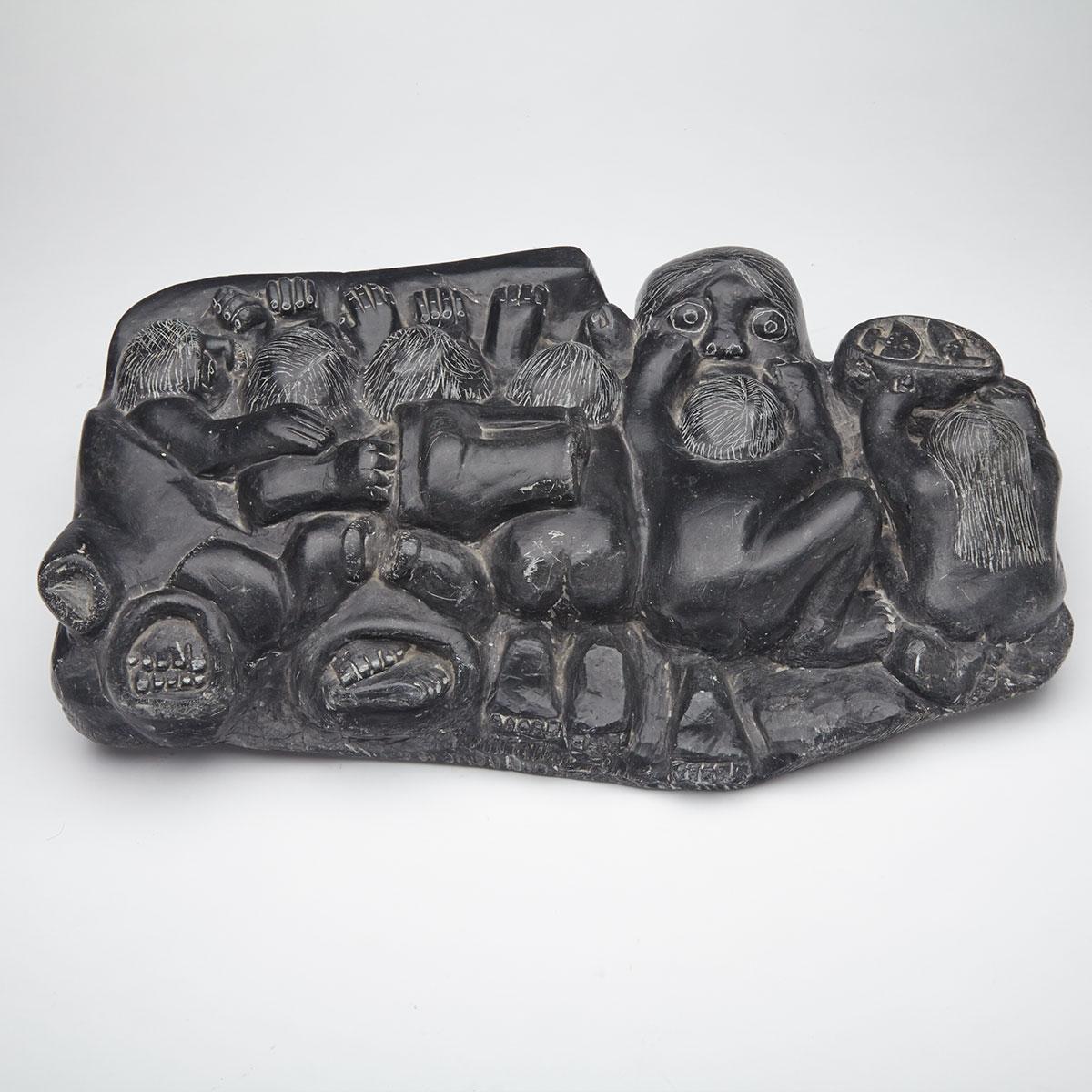 FIGURES ON A SLEEPING PLATFORM 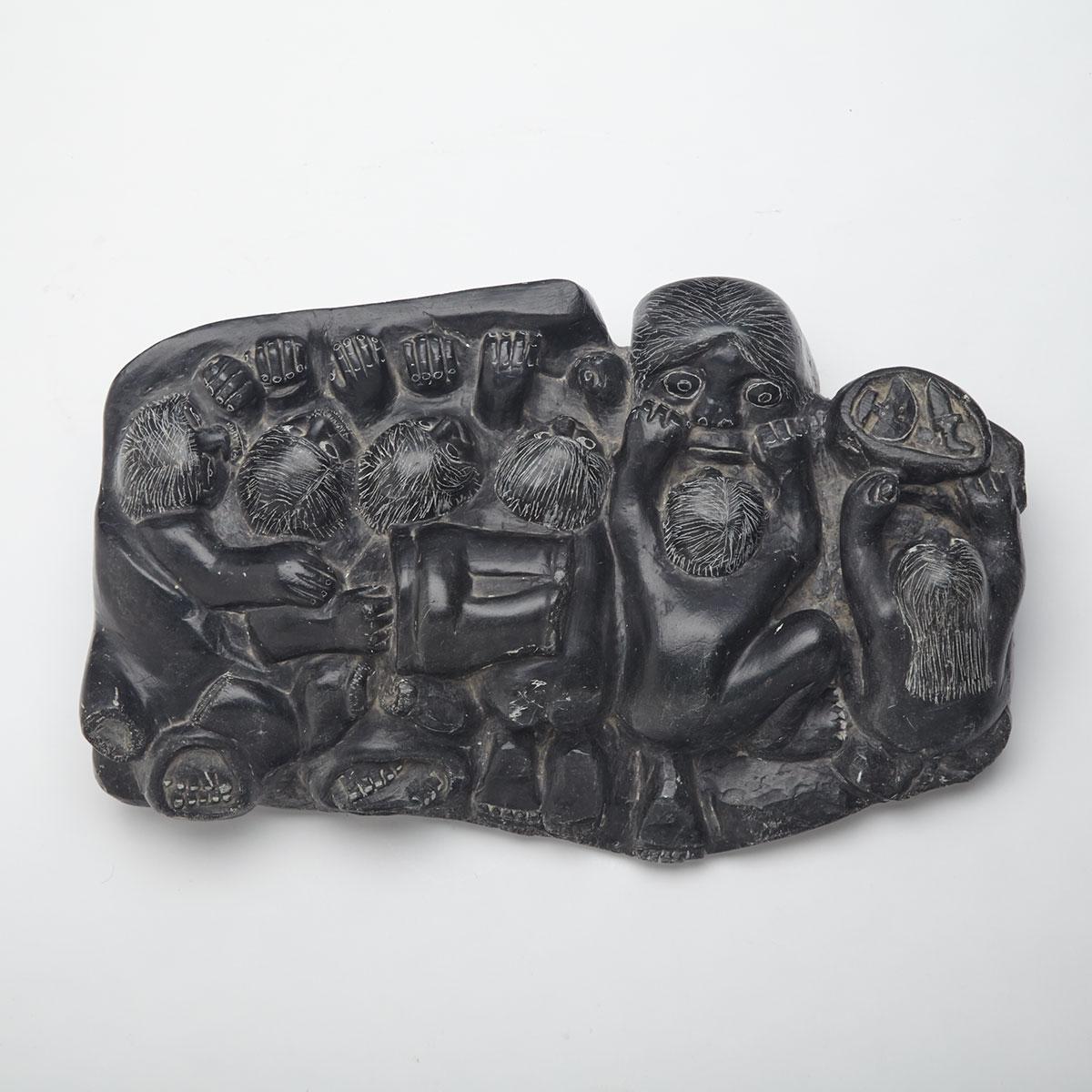 In 1977, La Fédération des Coopératives du Nouveau-Québec organized Davidialuk 1977. Although it was not planned as such, the exhibition became a “posthumous celebration of Davidialuk, the artist.” The catalogue features a foreword by Ian G. Lindsay, written shortly before the artist’s death in 1976. This work is illustrated on the adjacent page of Lindsay’s foreword, which reads as follows:

Born in 1910, Davidialuk – hunter, raconteur and artist – has lived intimately with the land all his life. By image and word, the memories of everyday events experienced by the hunter of yesterday are the stuff of his creativity. Nothing is too small or unworthy of notice.

Hand-in-hand with personal myth-making, he recalls the common legends of the people: the northern lights that decapitate him who whistles at them: the eagle and his human wife; the giant kayakman who strides the land, dwarfing the people; the spirit Katyutayuuq in the shape of a human head with breasted cheeks and vagina-clefted chin who propels herself on cloven feet; and not least the ubiquitous sea-woman simply described by Davidialuk as “half-fish”.

As the animals share with man the same problems of survival, Davidialuk presents them also in conflict or stress. Not for him the portrait of the handsome beast and the elegant bird. He prefers the apprehensive caribou rising from its haunches; the loon fiercely protecting eggs and young, or swimming upstream – muscles taut; the loaded pack-dog aiding the adventure of man and on the supernatural level, sometime helper of the spiritbird woman.

A realist and story-teller, his carvings and prints are a cornerstone of the record of a hunting people. With anecdote or elaborate tale, he bears the Eskimo tradition of the respected and beloved raconteur, conservator of racial wisdom, history and myth.

Fountain of ancient lore, Davidialuk is one of the last of the myth-makers. As he and others like him fade into time past, his work will, in celebration of a way of life departed, become even larger than life itself.

Explorations of conflict and narrative are in full bloom in this Davidialuk work. The believed subject for this piece is the story of Katyutayuuq invading on six figures in a snow house. The myth, as told by Davidialuk, is as follows,
"The stories of the first people of long ago went like this: Some migrants were travelling this day leaving one lot of them behind. In the night, while it was dark, those who were left behind were entered upon by big Katyutayuuq. When it came in, the big Katyutayuuq said,  “He is mine, he is mine, he is mine.” [i.e. mine to eat].
Big Brown, Big Stomach, Short Throat, Big Daughter, Big Tail, and Big Ptarmigan (the inmates of the snow house) those ones were come in upon [by the big Katyutayuuq]. The big Katyutayuuq was scratched by the One-Who-Says-‘Uriu’ [the call of the ptarmigan]. The One-Who-Says-‘Uriu’ scratched a long time, almost all night long. Big Katyutayuuq’s face was all mangled up. Because it was mangled, it went outside during the night. Then they sat up frightened all night long, not going out even when it became dawn. Only when it was fully day did they go out, for they were afraid of the big Katyutayuuq with its great big head and breasts on the cheeks, two big ones. So the story goes. That’s all; I stop.
Unikkaatuat sanaugarngnik atyingualiit Puvirngniturngmit. Eskimo stories from Povungnituk, Quebec, Zebedee Nungak & Eugene Y. Arima, National Museum of Canada, Ottawa, 1969, p. 37
From a singular stone mass, Davidaluk actualizes this legend of violence. In the centre, the enormous head of the Katyutayuuq enters through the snow house wall. A man lunges forward, seemingly to rake the cheeks of the intruder. At one end, four men are locked in close embrace. Their limbs twist and emerge amongst each other in frenzy. The unsettled positions of these bedmates describe a chaotic moment and serves to heighten the drama of the invading Katyutayuuq. Contrastingly, the woman to the immediate flank of the disruptive spirit concentrates on tending the kudlik before her, seemingly unengaged or unaware of the intrusion. The result is a scene of immediacy and intensity that is typical of Davidialuk’s great narrative sculptures. Here, there is a powerful tension between his subjects’ agonizing qualities – man in conflict with the spirit world– and a viewer’s pleasure at the extraordinary qualities of the stone work.