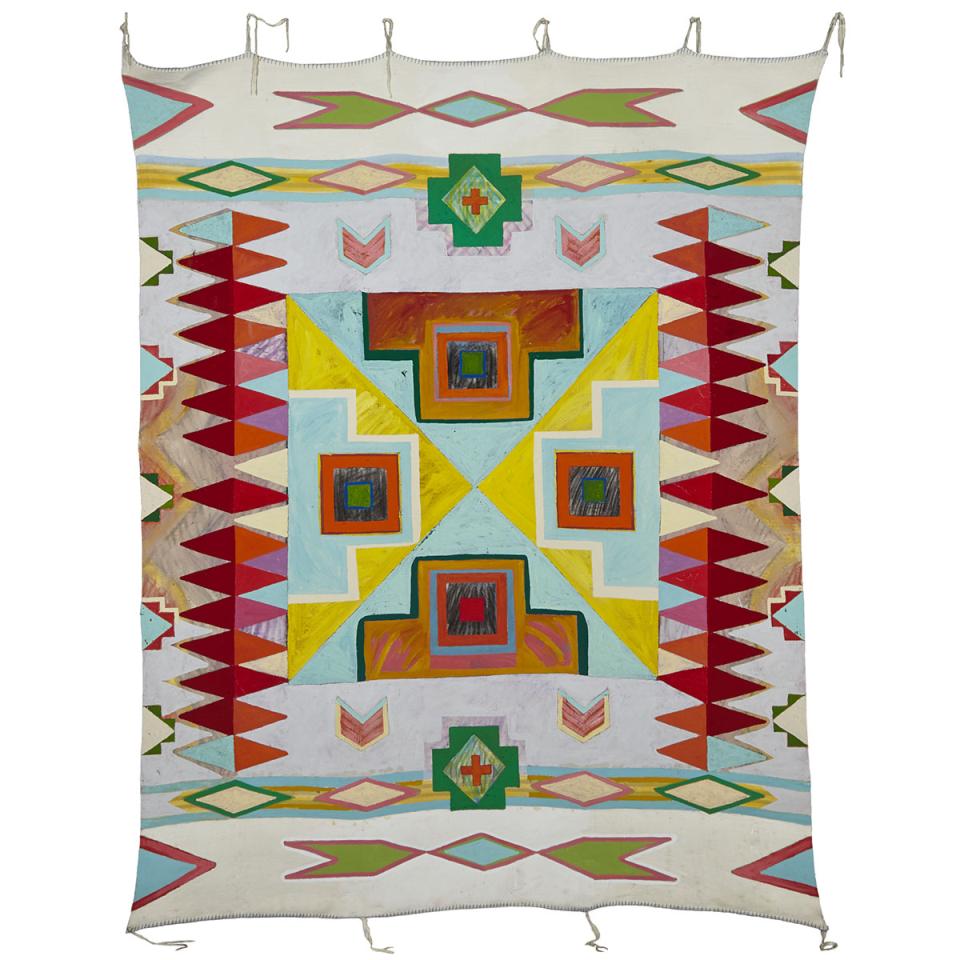 Bob Boyer is Métis with a cultural background influenced by the Assiniboine and Sioux. His works, broadly, speak to notions of a dual cultural perspective of his Native heritage and Western traditions of Abstract and Contemporary art.

Though he worked in a variety of media throughout his career, Boyer is perhaps best known for his series of blanket paintings completed between 1983 and 1995. Boyer elected to use a blanket as his substrate rather than a traditional canvas to address the political issues of First Nations people. In January 1988, the winter preceding the creation of this work, Boyer delivered a presentation in conjunction with the exhibition, Bob Boyer: A Blanket Statement at the University of British Columbia, Museum of Anthropology in Vancouver.

Martin comments that blankets are symbolic of a gift that North American Aboriginal peoples hold in high regard. Boyer recounted to author Robert Enright, “I used to help my mother make quilts. Making quilts and giving blankets is important in Plains culture.” In a personal correspondence with John Armstrong & Sarah Quinton, Boyer also stated, “the blanket to me is a symbol of all things that are comforting in the world.”

Thus, these works juxtapose the traditional sense of the domesticity associated with a blanket against a vocabulary of modern Western techniques. Reductive and hard-edged geometry – motifs borrowed from the Aboriginal peoples of the northern Plains – in this work are composed with blazing hues on a subversively soft and yielding material which turns the blanket, an object from which one should derive comfort, into something aggressive.

The incongruity of its formal qualities reinforces the already compromised idea of the blanket as it relates to Aboriginal populations, which were decimated in alarming numbers by the deliberate spread of the Smallpox virus using contaminated blankets in the nineteenth century.

“In 1994, Deidre Hanna remarked that these blanket paintings expand ‘the realm of post-painterly abstraction while acting as an in-your-face reminder of the devastation wrought among Canada’s First Nations. It’s this kind of turn that has earned Boyer a place in most of Canada’s public collections.’”