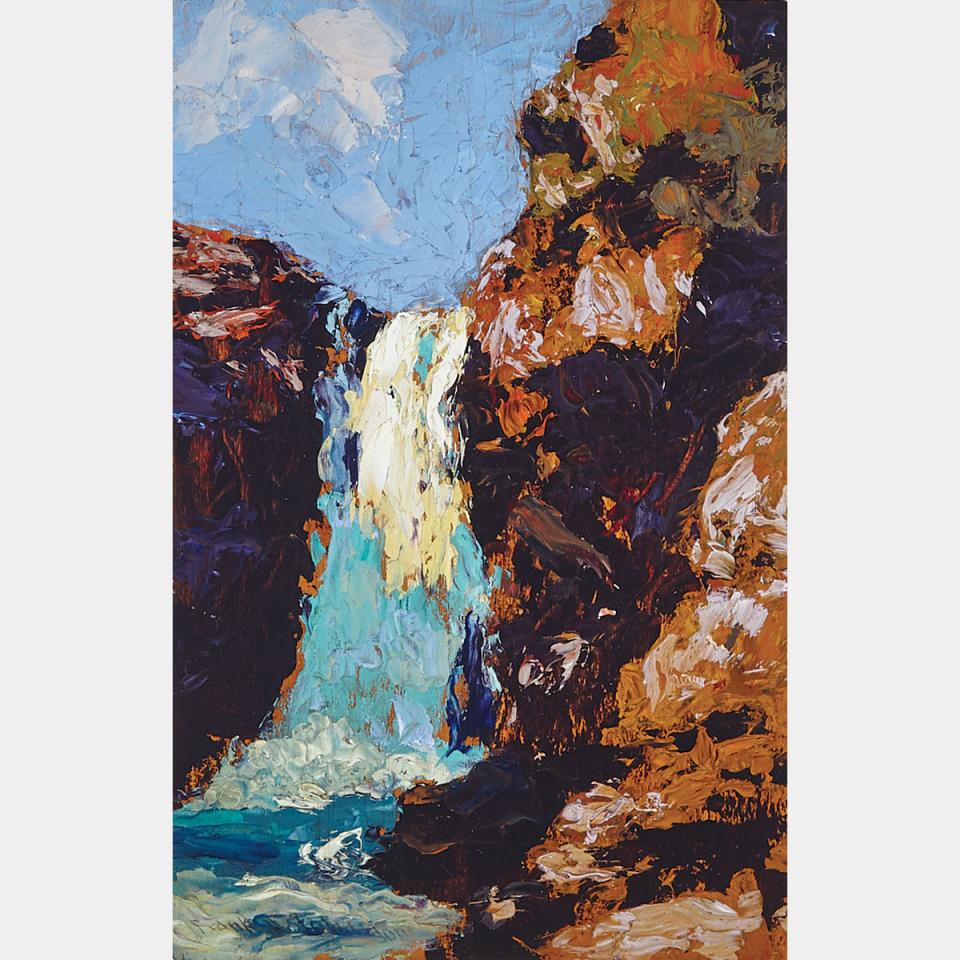 In September 1918, Lawren Harris invited Frank (later Franz) Johnston and J.E.H. MacDonald to accompany Dr. James MacCallum and himself on the first boxcar trip to Algoma (see lot 52). The sketches made on this trip were exhibited at the Art Gallery of Toronto in April 1919. Johnson showed the largest number of sketches, along with a number of “larger works painted as a result of impressions on the trip.” Johnston also took part in the second boxcar trip in the autumn of 1919, and the trip to Mongoose Lake with Harris, Jackson and MacDonald the following year.

Joan Murray writes: “Johnston at once found the rugged wild land an inspiration. As we see in this sketch of a Montreal waterfall amid craggy rocks, the trip and the company brought out Johnston’s painterly gifts: here, he applied a broad rich treatment and piled on the paint in a heavy impasto to convey the immediacy and energy of the scene before him.” Murray continues “In the autumn of 1919, Johnston wrote to his wife about a trip he had made with J.E.H. MacDonald under and down by the falls of the river and described the sketch that he made there as ‘one of his best’.” Johnston wrote: ”It was very wonderful down there sketching by the gorgeous falls pounding down... they seemed to fascinate you and the great roar of the water withal being a bright sunny day it made the place like an enchanted land...”

Waterfall, Algoma is an exceptional example of Johnston’s Algoma scenes. He worked largely in tempera on these trips and his oil sketches often share the decorative surface patterning of the temperas with paint applied in small mosaic-like patches, informed by his commercial work. However, the paint in Waterfall, Algoma is more freely applied, and this might have been a response to the subject matter (moving water) and paint handling of J.E.H. MacDonald or one of his other companions in Algoma in the autumn of 1920. According to Franklin Arbuckle, Johnston destroyed much of his early Group work in the 1930s. There may have been other sketches like this lot which have not survived.

As a collective, the Group believed that art must flourish in Canada before it would be a real home to its people, and set out to depict the natural splendours of the more remote regions of the country. Johnston undoubtedly shared the Group’s enthusiasm for wilderness landscape, but he was independently-minded and concerned that his association with the dissident group would have a negative impact on the market for his art. He mounted a one-man show at Eaton’s Fine Art Galleries in December 1920, and left Toronto in 1921 to head the Winnipeg School of Art and the Winnipeg Art Gallery. Johnston officially left the Group in 1924 and works from this early Group period are extremely rare.