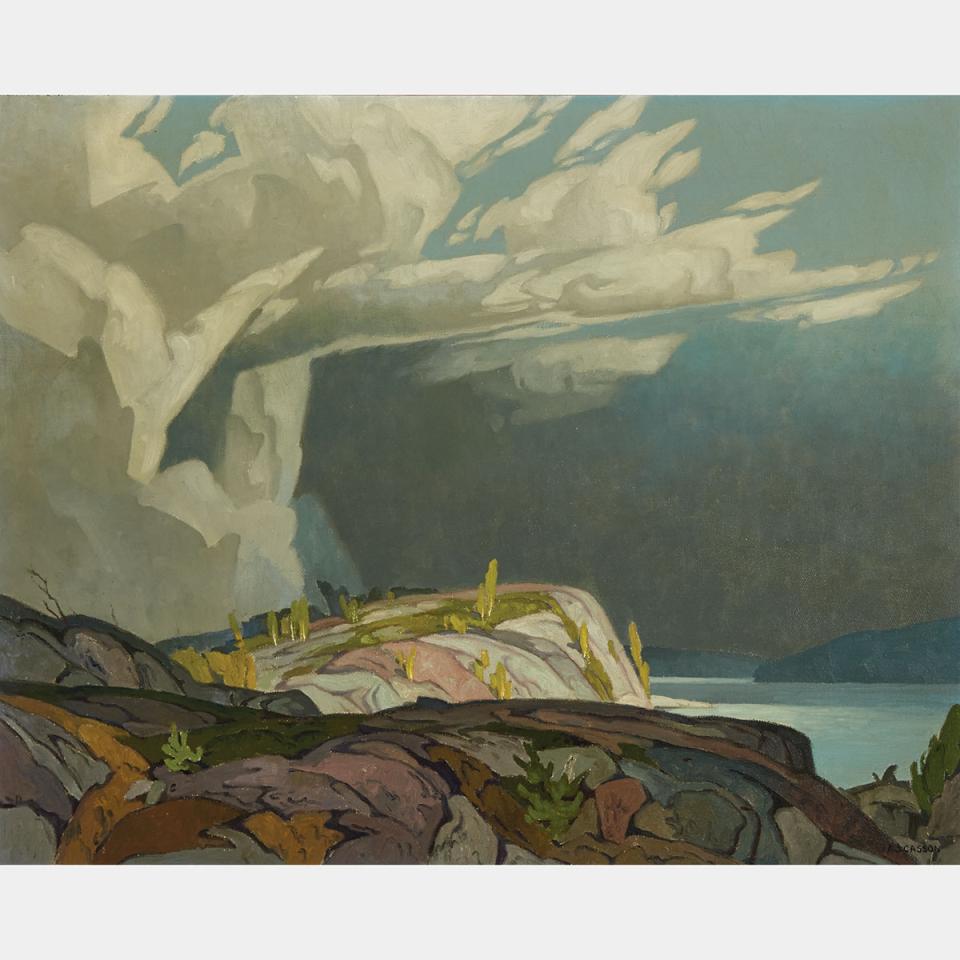 A. J. Casson was the youngest member of the Group of Seven, best known for his paintings of rural Ontario villages in which man-made structures are set within the sinuous contours of the natural landscape. Like many of his contemporaries, Casson worked full-time as a commercial artist, painting on the weekends or whenever he could find the time. It wasn’t until he retired from his position as Vice-President and Art Director of the commercial art firm of Sampson-Matthews in 1958 that Casson became a full-time artist, and found a dealer (The Roberts Gallery) to represent him.

In the later 1940s and 1950s, Casson responded to the prevailing taste for abstraction by exaggerating the design elements in his compositions; in the case of Summer Storm, Byng Inlet, this is most obvious in the gigantic cloud formations. The horizontal cloud which moves across the upper third of the canvas echoes the landmasses below, particularly the point of land that juts out into the inlet, painted in similar light tones. The cloud formations could be read as a map of the Georgian Bay coastline with its archipelago of islands as viewed from above. Byng Island is located near Britt, along the eastern shore of Georgian Bay. The use of highly expressive skies is typical of Casson; it allowed him to balance the upper and lower halves of the composition, and to create a pattern of alternating horizontal fields of dark and light that move up the canvas.

While the style is unmistakably Casson’s, the subject is typical of the Group of Seven, some of whom painted in and around Georgian Bay in the early days. Varley, Lismer and Jackson all painted canvases recording stormy weather conditions on the Bay, which may be read as allegories of the human spirit pitted against the power of untamed nature. Casson seems to have been more interested in the design potential of such dramatic views, which continue to capture the imagination of artists today.