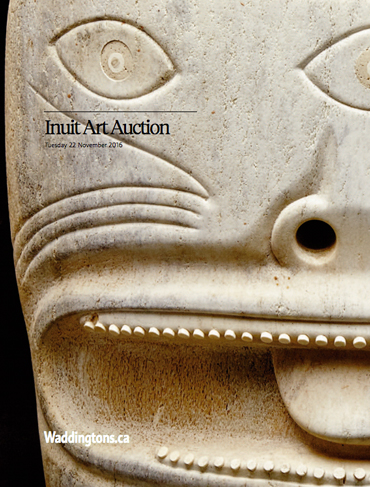 Waddington’s fall auction season was highlighted by an important auction of Inuit and First Nations Art on November 22, 2016 in Toronto. Celebrating 38 years in the Inuit Art market, Waddington’s presented 200+ works by some of the most important artists in Canada.

Christa Ouimet, head of Waddington’s Inuit and First Nations Art department, was diligent during the consignment process to ensure that the vast majority of art in the auction would be fresh to the market. The carefully curated auction included major pieces from several important private collections; with many works on offer on the secondary market for the first time. Ouimet cites the rare, large scale, double-sided work in bone by iconic Canadian artist Karoo Ashevak as an example; the consensus is: for such a large and striking piece by this distinctive artist to have been unknown to the market until this time is extraordinary.

Spirits Faces – Tooth Pull was a major highlight result of the auction setting a new record for the artist of $132,000.

Other examples of previously little-known works include an exquisite, early stone sculpture of a group of midwives by Ennutsiak, sculptures by Charlie Ugyuk including excellent examples of his top three subjects: an intricate demon; a highly realistic fishing scene; and his famous falcon. Superb pieces by Judas Ullulaq in both stone and antler were also featured in the auction, along with a selection of fascinating early Cape Dorset works including several small-scale gems for the Small Wonders section of the auction. Ouimet adds of special note was a large number of carvings that comprised the 1986/87 Art Gallery of Windsor exhibition: Sugluk, Sculpture in Stone 1953-1959.

An additional highlight of the auction was a magnificent 7’ work on cloth, Dropping Atom Bombs, by Métis artist Bob Boyer, which sold for $8,400.

Duncan McLean, President of Waddington’s, and leading Inuit Art expert says, “Waddington’s has played a vital role in establishing new markets for Inuit Art since our first auction in 1978. We are passionate about the art form and the culture of the Inuit and First Nations people and are delighted to present this unique art to an increasingly expanding market of discerning collectors.”

Referring to the auction preview McLean added, “Can you imagine a better way to introduce a visitor to the culture of Canada than inviting them to explore the diversity of Canadian art? Side by side, complementing each other, Canadian historical, Contemporary, Inuit and First Nations, Group of Seven, pre-historic, etc.; our auction preview provides a rare opportunity to appreciate the depth and breadth of Canada’s art and culture.”