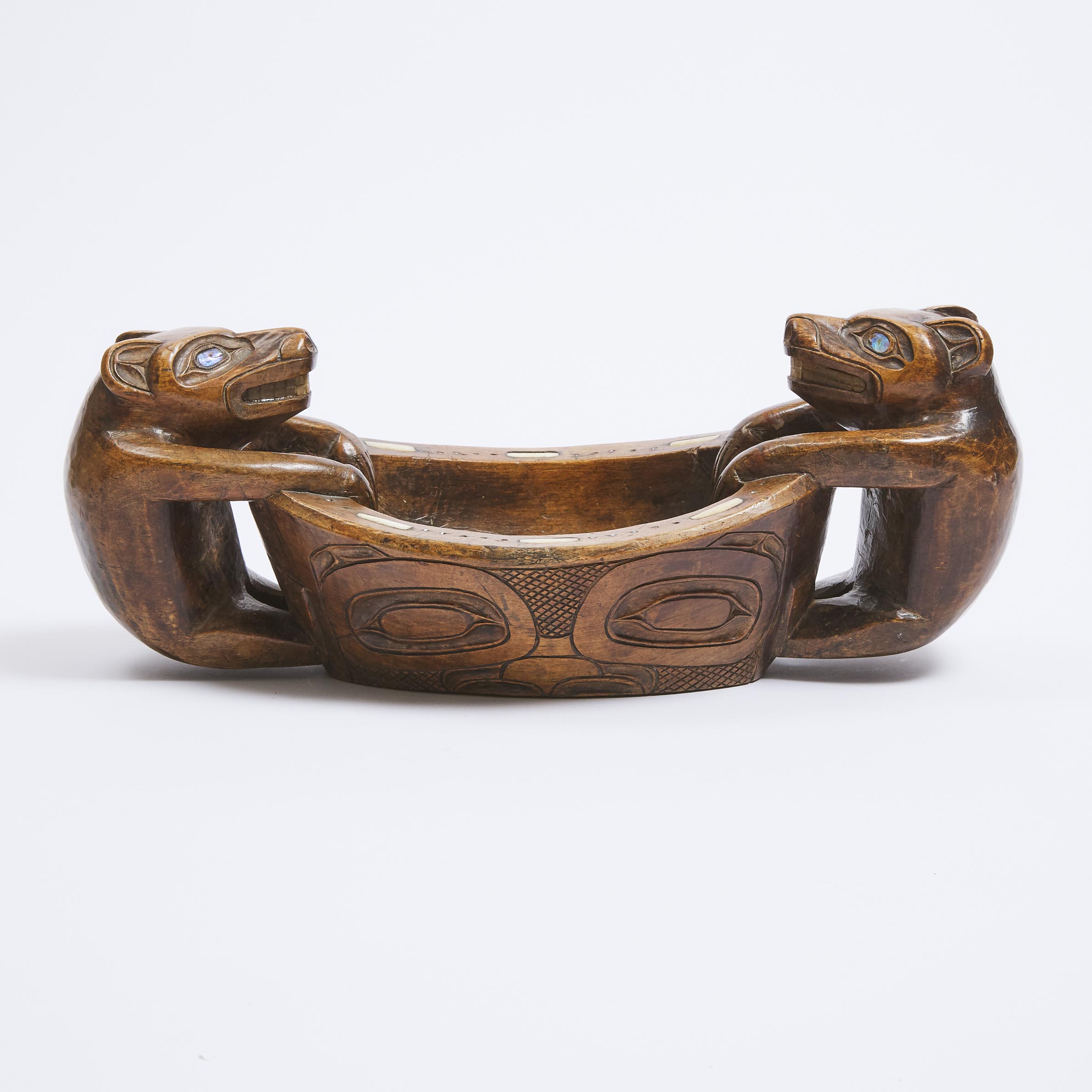 HOOTZ-TSIK; A DISH IN THE BEAR'S NEST

Feast dishes played an important role in historic Northwest culture. Often elaborately carved and decorated, they were important heirlooms and an essential component in ceremony proclaiming social status and clan affiliation, and relaying traditional narratives. Bowls among the Tlingit sometimes bore individual names, and themselves could be subject to stories and histories documented in ritual and song.

By the late nineteenth century, European and Euro-American incursion on the Coast resulted in changes to traditional practices, and in the separation of countless heirlooms from their associated names and stories. Within this shifting environment, individuals found ways of documenting and adapting tradition, as is evident here in this remarkable Tlingit feast bowl, one of a number of examples identified as the work of Augustus Bean, and his brother-in-law Rudolph Walton.

High-ranking members of Sitka families and respected leaders in their community, both Bean and Walton are remembered for their challenges to American legal authorities, contribution to the so-called ‘Last Potlatch’ of 1904, and for carving objects for ritual and ceremonial use, and traditionally informed objects for sale to Euro-American collectors and institutions. [1]

In 1926 Rudolph Walton said of a “Hootz-tsik” or bear feasting bowl closely related to the present example and acquired from the artist by the Sheldon Jackson Museum in Sitka, Alaska: “This is the kind of dish the old hunter used. His name was Kotz. Long time ago he was captured by the Bears and married into the Bear tribe. Later on he had sons and daughters, half men, half bear. This kind of dish he used, a dish in the Bear’s Nest.” [2]

The present bowl’s first known owner was Admiral Charles H. Rockwell (1840-1908). [3] Rockwell was stationed in Sitka as Lieutenant Commander of the U.S.S. Jamestown, the sole American administrative body in the region between 1878 and 1884. [4] Augustus Bean and the younger Rudolph Walton were both well known to Navy and government representatives in the region as early as 1894 and would have been in close proximity to Rockwell during his stay in the region when the present bowl was likely sold or gifted to him. [5]

Many countries prohibit or restrict importation or exportation of property containing ivory, whale bone, sealskin, and/or products derived from other endangered or protected species, and require special licenses or permits in order to import or export such property. It is the responsibility of the buyer to ensure that the item is properly and lawfully exported / imported. Please do not hesitate to contact one of our specialists for further details.