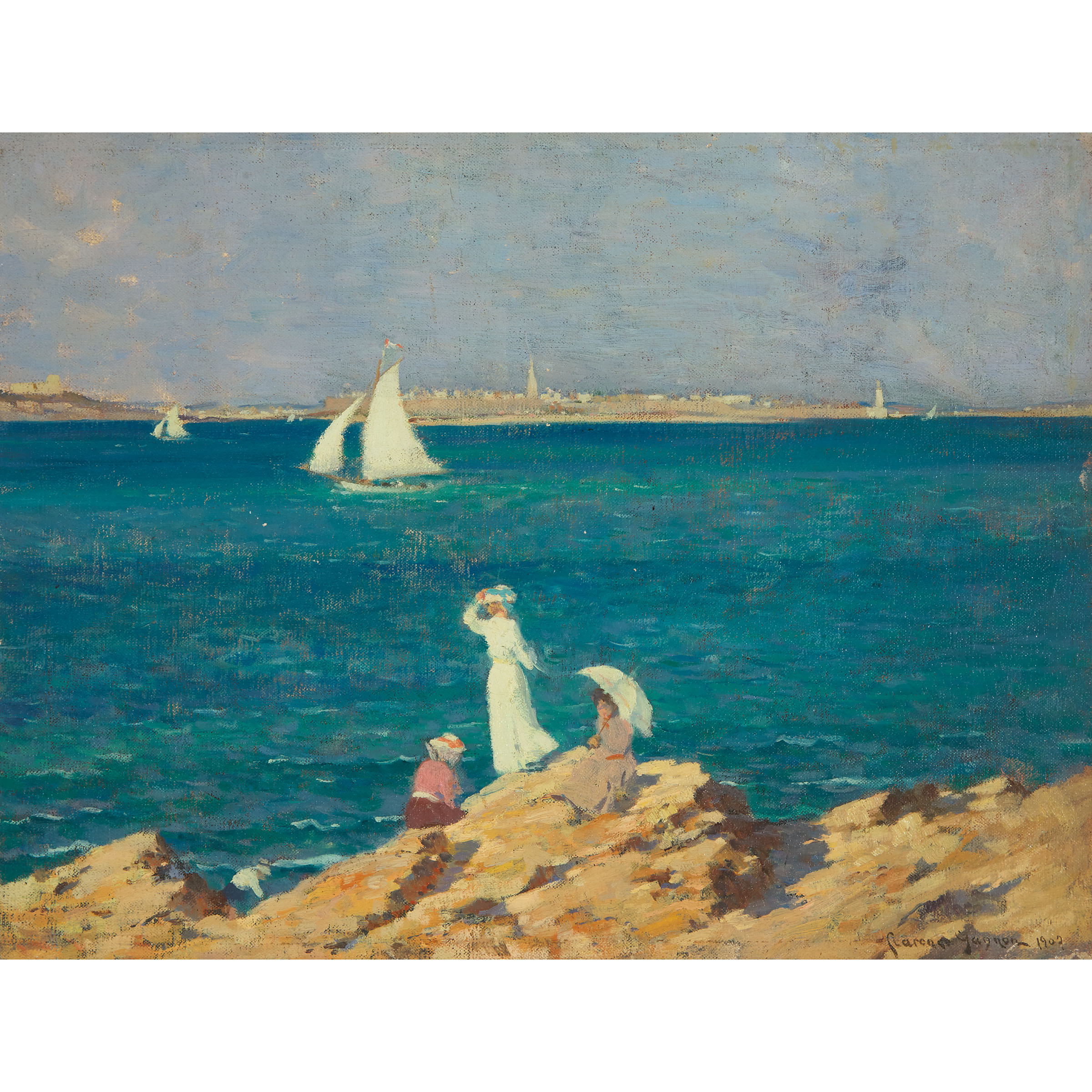 Beach Scene, St. Malo is an early gem by Gagnon that sparkles with his influences and achievements up to 1907, and flashes to his later career-defining views of rural Quebec. Three years before, in 1904, a 23-year-old Gagnon left Canada for his first study trip to Europe. Having trained in Montreal under Edmond Dyonet and William Brymner, his precocity needed a bigger opportunity, and Paris was the place. Gagnon developed steadily there and, after three years of effort, his artistry vaulted in Saint-Malo in the summer of 1907.

Snug against the bottom of the picture plane, three women are atop a rocky outcropping overlooking a bay on a blustery summer day in Brittany. Turquoise water separates them from Saint-Malo as boats in full sail head toward the English Channel. Along the horizon are Grand-Bé on the left and Saint-Malo in centre identifiable by the spire of its Cathédrale Saint-Vincent, and its jetty, Môle des Noires, terminated by its lighthouse.

The standing figure is likely Katherine Irwin, whom Gagnon married in December 1907. This is supported by his multiple studies of her around this time, and the recurrence of figures in the same apparel in contemporary Brittany paintings. One example being the woman in an identical white outfit and hat with turquoise ribbon seated in the foreground of the Montreal Museum of Fine Arts’, The Beach at Dinard, and another being two of the women seated at bottom left in the Musée national des beaux-art du Québec’s Summer Breeze at Dinard with duplicate outfits and parasol as this painting.

Beach Scene, St. Malo is one of a small group of exploratory beach scenes on size-8 canvases, smaller than the above works. Gagnon’s canvas for Beach Scene, St. Malo came from Lefranc et Cie., the same Paris colour merchant patronized by Paul Cézanne, Paul Gauguin, and Georges Braque. Another Gagnon canvas of the same size in a private collection suggests a painting place near the same cliffs in different weather and with a distinct pastel palette akin to some of Claude Monet’s paintings of Brittany and Normandy. A third, Rocks, St. Briac, Brittany, is an expressive view of rocks being beaten by sea and storm. Now in the collection of the Art Gallery of Ontario, it was boldly acquired from the 1909 Ontario Society of Artists exhibition by Canada’s foremost print connoisseur, collector of Gagnon’s prints, and driving force behind the establishment of the Art Museum of Toronto (now, Art Gallery of Ontario) and Royal Ontario Museum, Sir Edmund Walker.

In Beach Scene, St. Malo, Gagnon captured the contrast of the cool turquoise waters of the English Channel in a deft mix of cobalt blue and Naples yellow, with the sun-soaked rocks in Naples yellow and red ochre. As if channeling Eugène Boudin or Édouard Manet, Beach Scene, St. Malo manifests the humanity, light and movement beloved in Impressionist painting that would continue to underpin Gagnon’s painted œuvre in Canada, in Charlevoix and the Laurentians.