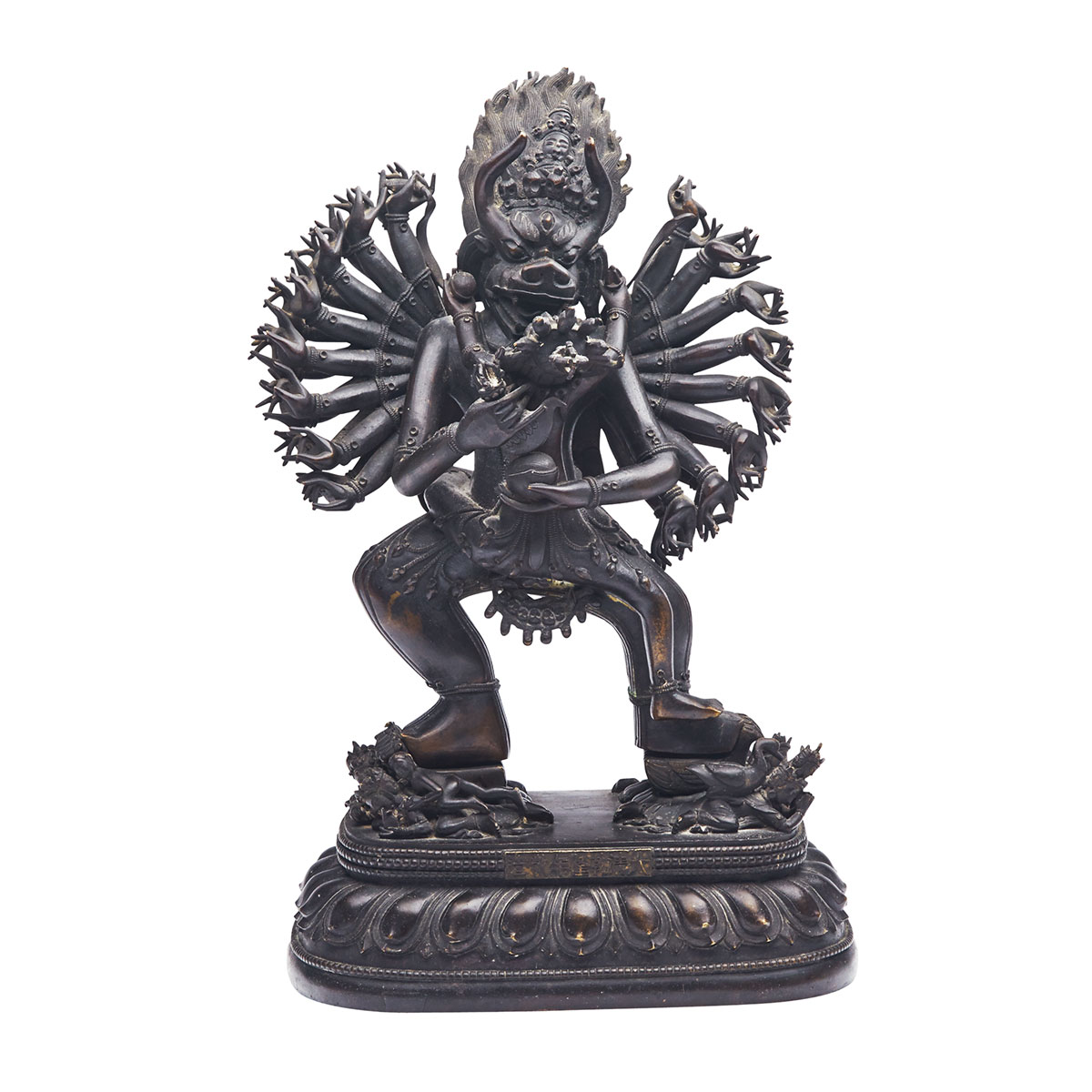 Cast standing in alidhasana upon birds and horses and the bodies of prostrate figures, above a beaded lotus plinth, numerous arms radiate about him with the primary arms grasping his consort and holding a kartika ritual curved knife and skull cap, wearing an elephant skin at his back, three heads within the tall flaming hair, wrathful expression on the face
height 18.1" — 46 cm.
seven-character Qianlong mark to base

Heavily cast and of large size, this extraordinary example of Yamantaka rendered in the form of a wrathful Manjusri, is extremely rare. Known as an ‘Istadevata’ in Mahayana Buddhism or ‘Yidam’ in the Gelug school, Yamantaka protects followers of tantric Buddhism, and personifies the victory of wisdom over death. The Qianlong emperor was fascinated with Tibetan Buddhism and favoured the buffalo-head figure, which he perceived as his personal meditational deity.
It is possible that this current Yamantaka came from one of the Imperial ‘Liupin Folou’ or the ‘Six Buddhist Class Temples’. These temples were dedicated to Je Tsongkhapa, the founder of the Gelug School of Buddhism. Under Emperor Qianlong's reign, numerous imperial Gelugpa temples were built in the Forbidden City to worship this sect. In the ‘Liupin Folou’, more than 700 bronze deities were placed on separate altars according to their levels of tantras. Most of them ranged in size from 15 to 50 cm. Similar to the current example, many of the Imperial Buddhist bronzes were parcel gilt and seated on a beaded lotus base. Additionally, several of these bronzes also bore the same impressed seven-character Qianlong mark, which was only used before the 46th year of the Qianlong reign.
Similar Imperial bronze figures from the ‘Liupin Folou’ have appeared in the auction market over the years. A parcel gilt bronze figure of Kalachakra with a similar Imperial mark was sold at Sotheby’s London, November 4, 2009, lot 215. A bronze figure of Namgyalma with seven-character Qianlong mark was sold at Poly Auction, Beijing, December 1, 2007, lot 924.

The Estate of Harry Handel (1916-1972), owner of Everyman’s Bookshop in Montreal. Purchased during the 1950’s at the Gurie Gallery, thence by descent within the family.