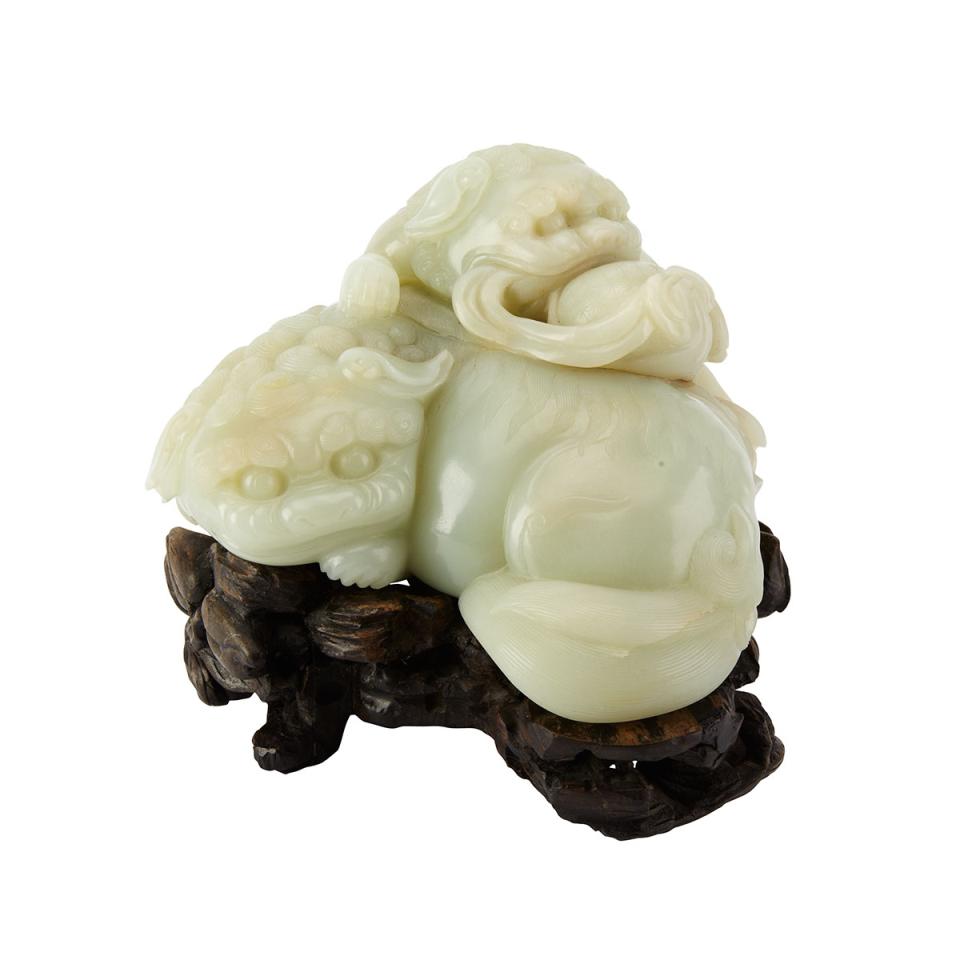 The large jade boulder expertly carved in the round to depict a pair of recumbent lions with one resting on the other, both animals masterfully rendered with curling tufts of hair along their manes and compressed faces, the fur parting along their backs; the smaller beast with a playful and animated expression, its eyes widened and holding a long swirling ribbon in its mouth, tied around a brocade ball and continuing along the underside connecting to a secondary patterned ball, its front paw perched on the larger lion which is resting in a curled position with its bushy tail wrapped along the front of its muscular body; the stone of mostly white tone with a hint of celadon and minor white and yellow inclusions, the natural fissures of the jade incorporated into the overall design especially along the sweeping tails, curling hair, and cascading ribbons highlighting the depth and movement of the carving. Wood stand
3.7" x 6.7" x 7.3" — 9.5 x 17 x 18.5 cm.

The pairing of two lions, one larger and the other smaller, can be understood literally as “senior lion-little lion”. However, this combination bears an additional significance and can be regarded as a wish for a successful career, specifically in the official court realm. Traditionally, the lions were associated with two highly prestigious positions in Imperial China - the Grand Preceptor, the emperor’s teacher, and the Junior Guardian, the crown prince’s mentor. Both positions related to education and teaching and played upon the homophone for lion, which was “teacher or master.”
This jade carving of two lions is exceptionally rare because of the size and quality of the work. Of rounded pyramid form, the pale celadon stone is much larger than most examples, and is carved over multiple plains, creating an increased sense of depth and dimension. Expertly handled, the two figures are carefully rendered with a high level of detail throughout, from the swirling curls of the lions mane to the cascading ribbons attached to the brocade ball. For a smaller example of this subject, see Christie’s New York, “Superb Jade Carvings from an Important European Collection,” September 15, 2011, lot 1008.

Spink & Son, Ltd., London, 1960’s by repute
Lots 177-184: Chinese Works of Art from the Estate of the 3rd Viscount Bearsted, London, England
The following lots were purchased during the 1960’s and 1970’s by the 3rd Viscount Bearsted, Marcus Richard Samuel (1909-1986), whose family founded Shell Transport and Trading Company. He was an avid collector of Chinese and International art and bequeathed the items to relatives who are now living in Calgary.
Founded in 1897, Shell Transport and Trading Company merged with the Royal Dutch Petroleum Company in 1907 to form the Royal Dutch Shell Group now the fifth-largest operating business in the world.