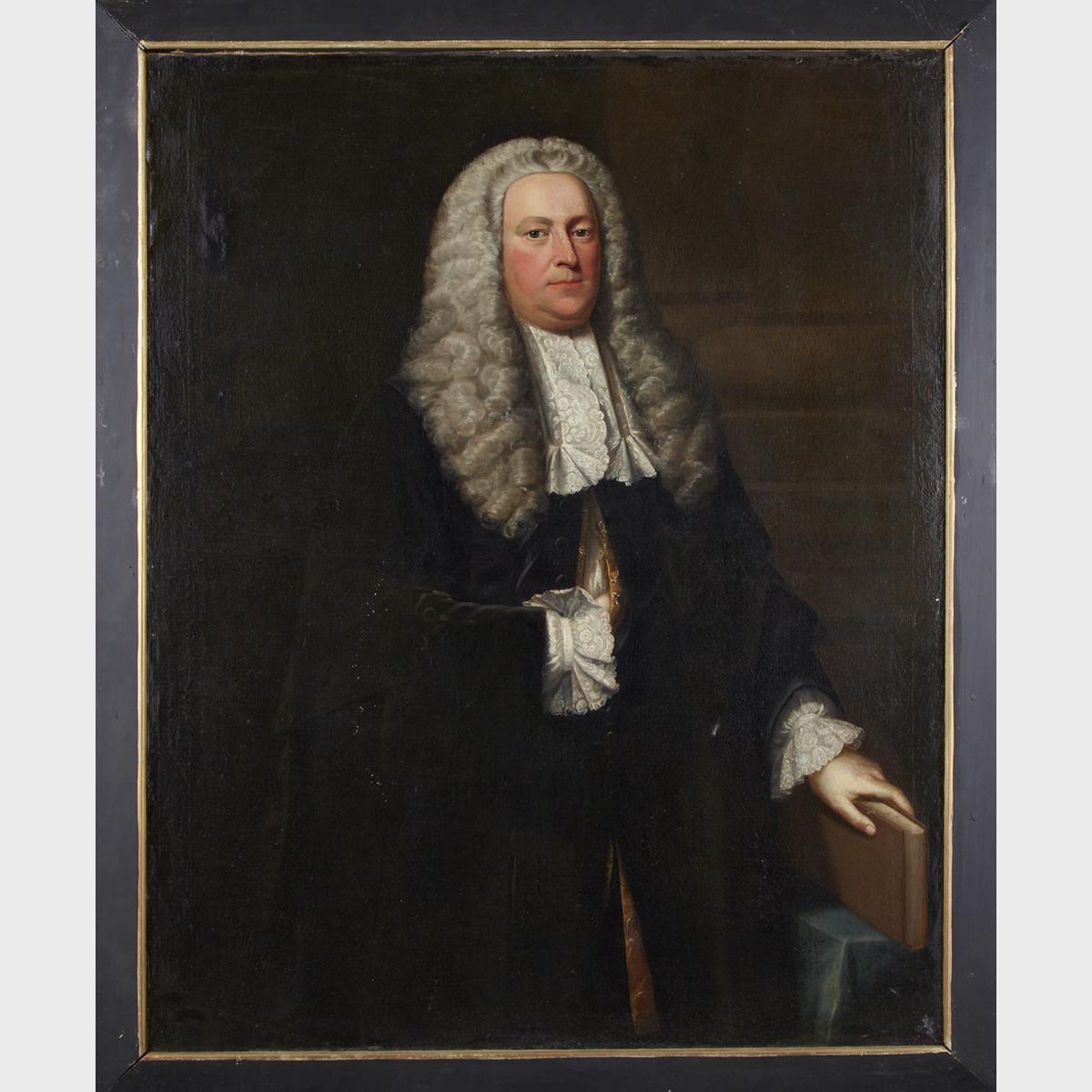 PORTRAIT OF THE RIGHT HONOURABLE WARDEN FLOOD OF FLOOD HALL (1694-1764), LORD CHIEF JUSTICE OF IRELAND, AS AN OLDER MAN IN HIS ROBES, AFTER 1760, ABOUT 66 YEARS OF AGE 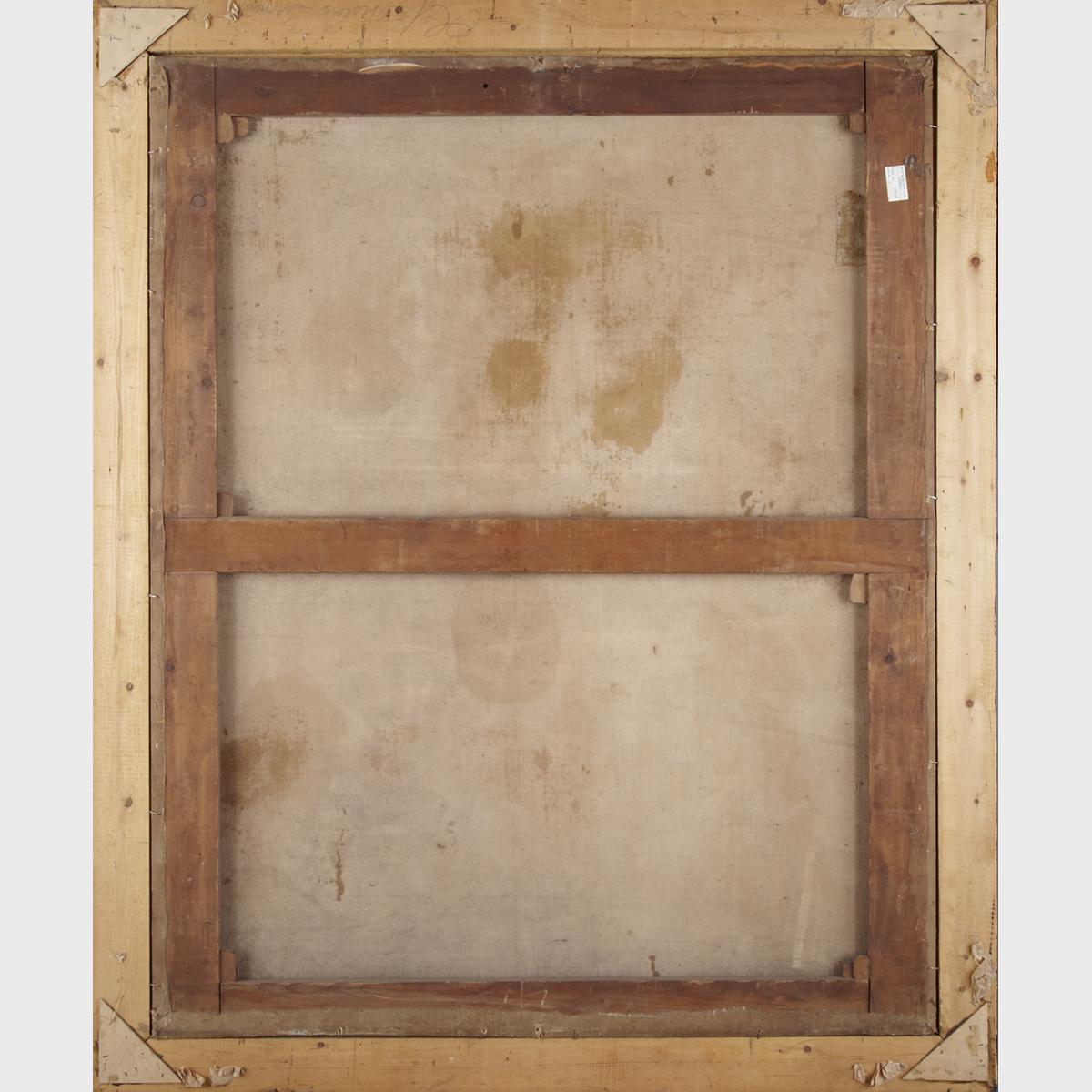 Collection of the sitter;
Ballyduff House, Ireland (pictured below);
The Estate of Peter Richard Connellan Solly-Flood until 1990 when the family portraits, lots 73 to lot 80
inclusive in this sale, were shipped to Montreal, Canada;
By descent to the present Private Collection, Montreal, Canada

Note to the provenance : Lieutenant Colonel Peter Richard Connellan Solly-Flood O.B.E worked
as aide-de-camp/secretary to Churchill on his post WW2 tour of the United States in 1946. He helped to
co-write many of his speeches as Churchill supposedly suffered from a mild form of dyslexia.
He was awarded the Officer of the Most Excellent Order of the British Empire in 1946.

The sitter, Warden Flood of Flood Hall, in the County of Kilkenny (1694-1764), was the father of The Right Honourable Henry Flood (1732-1791), who became an important member of the Irish House of Commons.

The Right Honourable Warden Flood was born at Burnchurch in County Kilkenny, son of Frances Flood and Anne Warden. He was educated at Kilkenny College and the University of Dublin, taking his degree of Bachelor of Arts in 1714. He entered Middle Temple in 1716 and was called to the Irish Bar in 1720.

He was appointed Solicitor-General for Ireland in 1741, Attorney-General for Ireland in 1751, and in 1760 was appointed Chief Justice of the King's Bench. He acted as a judge of assize and was briefly Speaker of the Irish House of Lords. He became the Member of Parliament (MP) for Callan in 1727. He had a house at Cuffe Street in Dublin and at Farmley in Kilkenny. He married Miss Isabella Whiteside and dying in 1764, was survived by his son: The Right Honourable Henry Flood of Farmley in the county of Kilkenny.

Warden Flood was considered a very distinguished lawyer in his time but he is mainly remembered as the natural father of the statesman Henry Flood.

For the importance of Warden Flood’s son, The Right Honourable Henry Flood (1732-91) see James Kelly, Henry Flood Patriots and Politics in Eighteenth-Century Ireland (Univ. of Notre Dame Pr August 1998). Prior to James Kelly’s book, there was scant Flood family history. Drawing on public and private documents, Kelly’s biography contextualizes the importance of the family within their home county of Kilkenny, as well as in relation to Irish opposition politics and the politics of empire before the French
Revolution.

The junior Flood was an Irish Patriot of the eighteenth-century. He was “convinced that Irish Protestants deserved to be afforded the same constitutional, political and economic rights as Englishmen”, and “devoted his life to the advancement of that cause”.
In 1782, Flood Jr. is depicted in the British cartoonist, James Gillray’s (1756/57-1815), engraving: Irish
gratitude (Henry Flood; Henry Grattan; Edmond Sexton Pery, Viscount Pery), by James Gillray (died 1815), published 1782. This Flood family portrait is one of only four portraits of Henry Flood in The National Portrait Gallery, London. Three of the four works are duplicates of an engraving After an Unknown Artist
depicting a portrait of Flood in military dress.