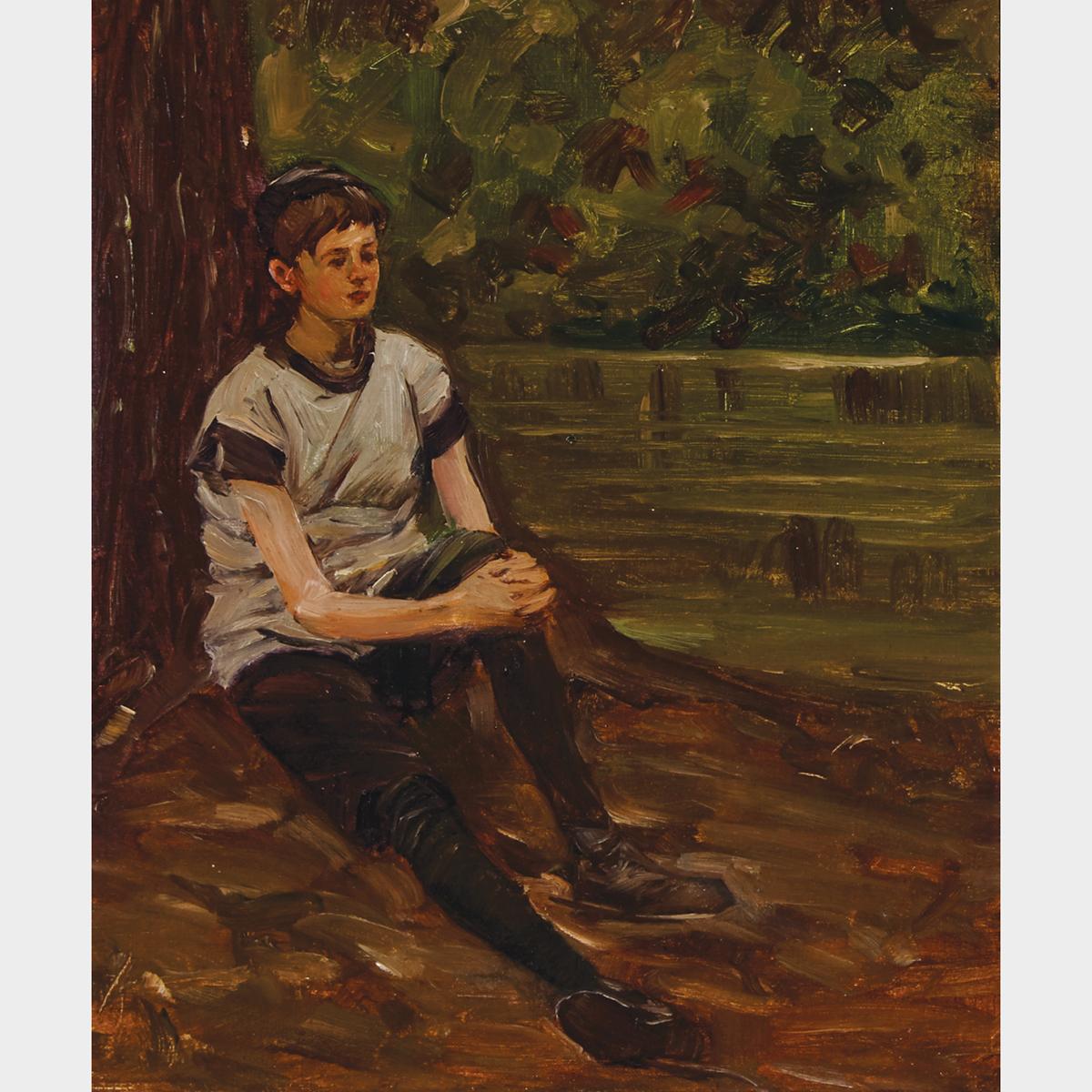 JACK RESTING BY A TREE

“The Coupler Presents-Jack T. Hulme,” The Coupler (The Official Magazine for the employees and pensioners of the Toronto Transit Commission), No. 7, Vol. 11, November 1936.

John Thompson Hulme, or Jack as everyone called him, was born in Toronto in October 1898. Leaving the city behind for the farming life, Jack moved with his family to Aurora (Oak Ridges) while still a boy. "The district surrounding his parent's farm was a favourite haunt for artists and (Jack) was able to pick up considerable pocket money by merely posing for them in the shade of some tree or with a fishing rod at the edge of a stream.” One such artist, a young friend of the family, was Lawren Stewart Harris. Painted on the family property, Harris is believed to have paid Jack 25 cents to sit for this portrait.

The quiet of such afternoons on the farm were interrupted by the outbreak of World War I. Claiming to be a year older than he was, Jack enlisted in the army on December 20th, 1915 and joined the 127th Battalion "York Rangers." He was sent to Britain with the Canadian Over-Seas Expeditionary Force alongside his father and his older brother, Howard. He quickly rose through the ranks of service, holding the position of Sapper, then Bugler and finally, Private. After returning from the War, Jack worked as a painter and then for the Toronto Railway (TTC) as a conductor.

In 1940 he reenlisted in World War II, leaving behind his wife and a 10 year old son. He served his time overseas with the 2nd Battalion, Royal Canadian Engineers, starting as a Private and eventually becoming a Quarter Master Sergeant. When the war ended, he returned home and continued his career with the TTC, ultimately as a Supervisor. Devoting his spare time to his family and the Masonic Lodge, he loved to work in the garden, make his own wine and was a champion Crib player. In this early work, executed prior to his formal training, Harris captures Jack as those close to him described him: quiet, unobtrusive and frank. Jack passed away on September 12, 1973.