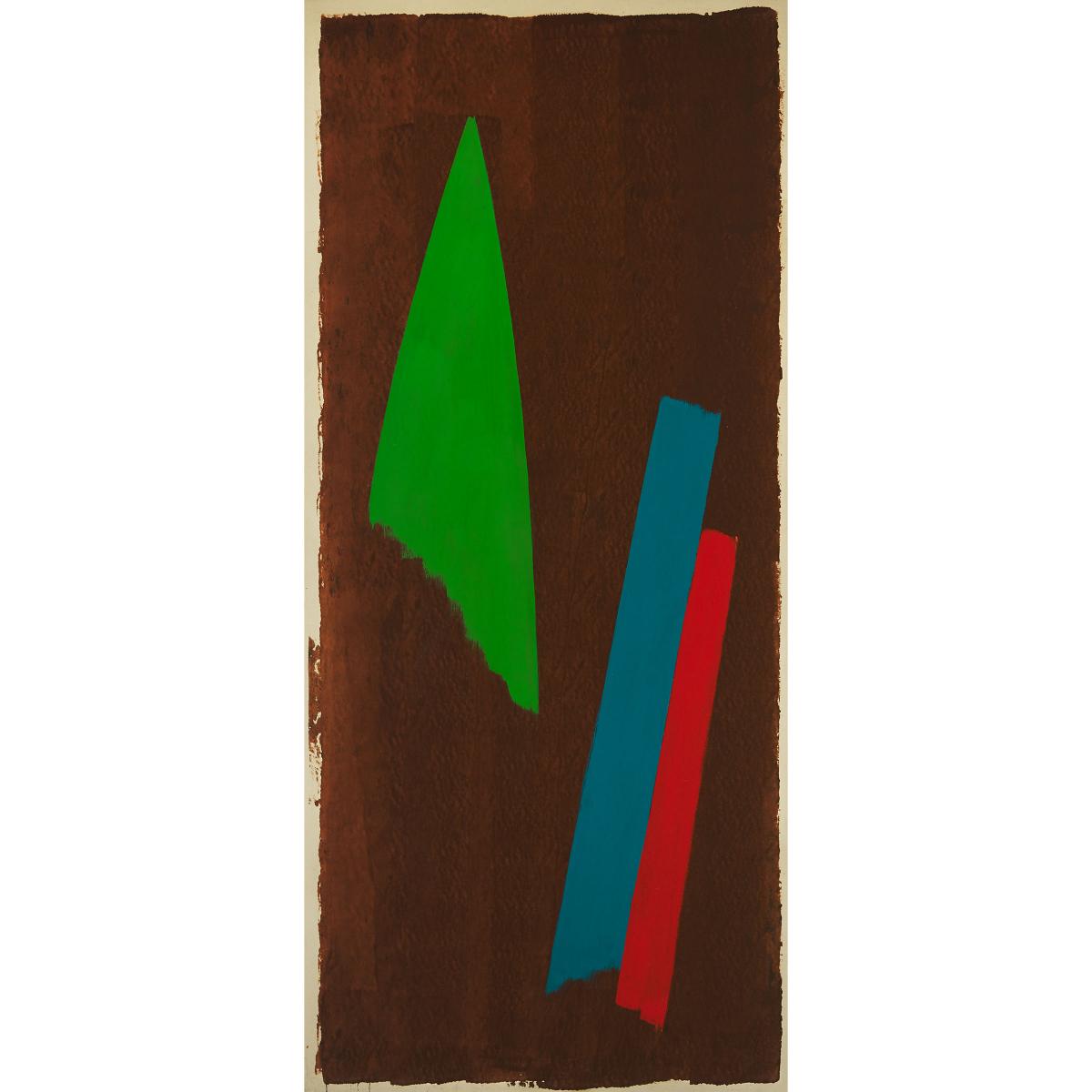 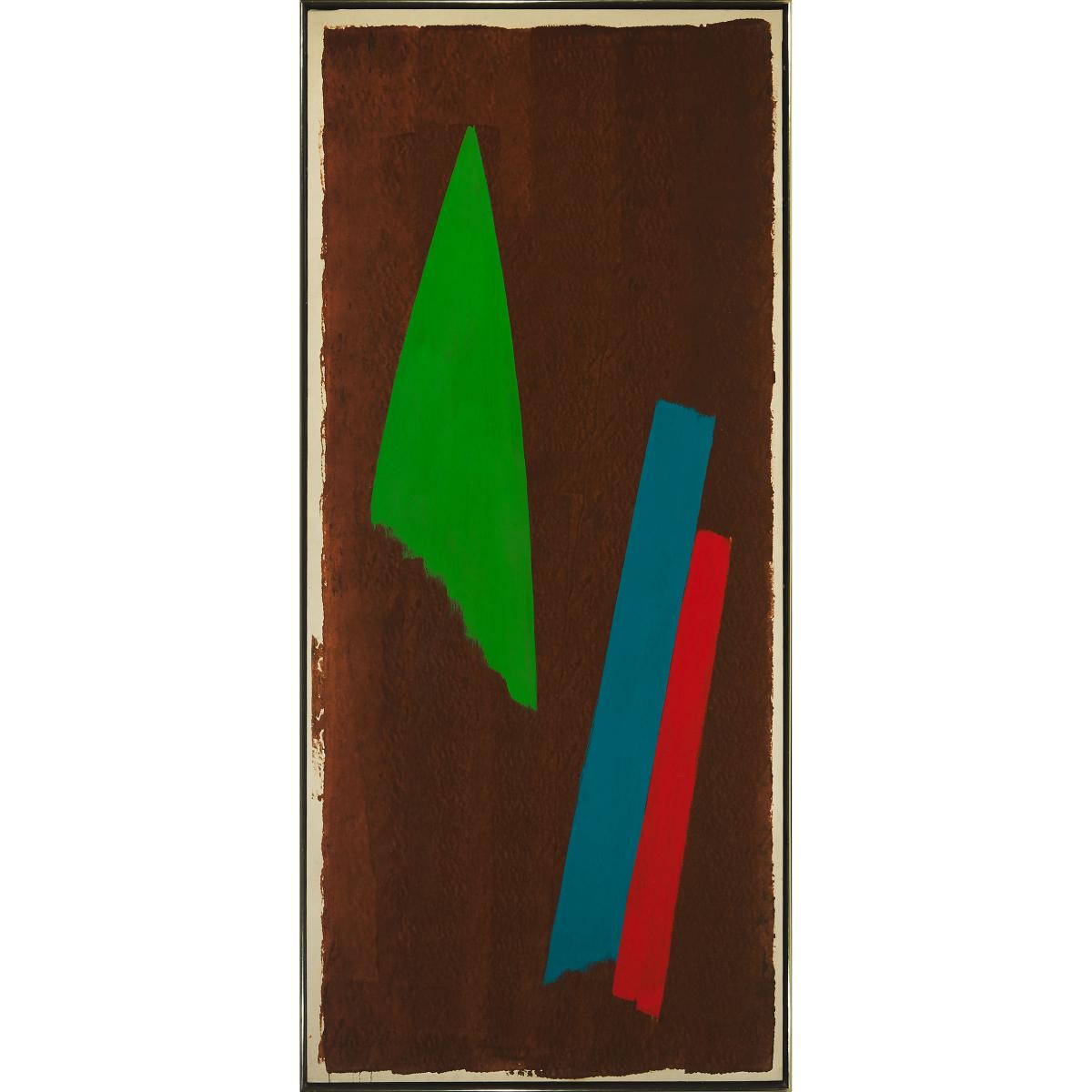 The singular pointed figure in Green Up is a positive sign, the kind of shape and colour that screams: go! Kelly green is associated with vigour and upward progress, like the fresh shoots of nature in the springtime. This lively green is also emblematic of Ireland, where the artist and his wife had traveled to in 1969. Green Up is one of only four paintings that Jack Bush made in December 1970. The last painting he made that year, titled Down, included multiple ‘dart’ shapes diving downward. By comparison, and name, Green Up feels optimistic.

There is a patrimony to the ‘dart’ featured in Green Up. In April 1969, Bush was diagnosed with angina. This heart condition is often accompanied with feelings of intermittent tightness in the chest. Bush experienced spasms of pain in sharp succession, like a flutter of darts, which he expressed in his abstract paintings of the time. While Bush’s ‘Spasm’ series was born from a negative physical hardship, the colours he used were light, fun and downright happy. Painting was always cathartic for the artist. It was a stage upon which he could exert control and conjure levity.

The cheerful green colour in Green Up is reinforced on the right side of the canvas by the two forward-slashing bars in primary blue and red, side-by-side. The appearance of conjoined colour bars is reminiscent of the highly original Series ‘D’ paintings that spanned 1969-70. The way in which Bush snuggled up the red bar against the blue bar in Green Up suggests a kind of symbiotic relationship between these shapes and this technique of riding one colour off the belly or back of another is seen in many of the colour bars that Bush featured in paintings such as Series 'D' April Blue (April 1970) and Series 'D' Upway (June 1970). An optical effect is created when such strong colours are placed in close proximity to each other. The sharp contrast of blue against red creates an afterimage in the viewer’s eye. The effect is not unlike Josef Albers’ Homage to the Square paintings, which he mastered between 1949 and 1976. Albers expertly placed colour next to colour like a set of nesting boxes for pure optical delight.

While Bush, like Albers, made great visual effects with few colours, Green Up is, however, an exemplar of Bush’s style, which is wide-ranging. He has united key aspects from two of his important series – the ‘Spasm’ and Series ‘D’ paintings. This kind of hybridization of styles is just one reason why Bush’s paintings are never redundant, no matter how simple they may seem to be. Bush’s clarity of vision and eye for colour makes so much of his work enduringly contemporary. Green Up is, remarkably, more than fifty years young and, by all appearances, it continues to march confidently into the future.


We thank Dr. Sarah Stanners for contributing this essay. Dr. Stanners is an Adjunct Professor in the Department of Art History at the University of Toronto. She is an independent art historian and curator who has dedicated 10 years to the forthcoming Jack Bush Catalogue Raisonné as both author and director of this major work of scholarship. In 2014 she co-curated the Jack Bush retrospective exhibition for the National Gallery of Canada and from 2015 to 2018 was the Chief Curator of the McMichael Canadian Art Collection.

The work is in very good condition, with very minor condition issues. Please contact us for a detailed condition report.