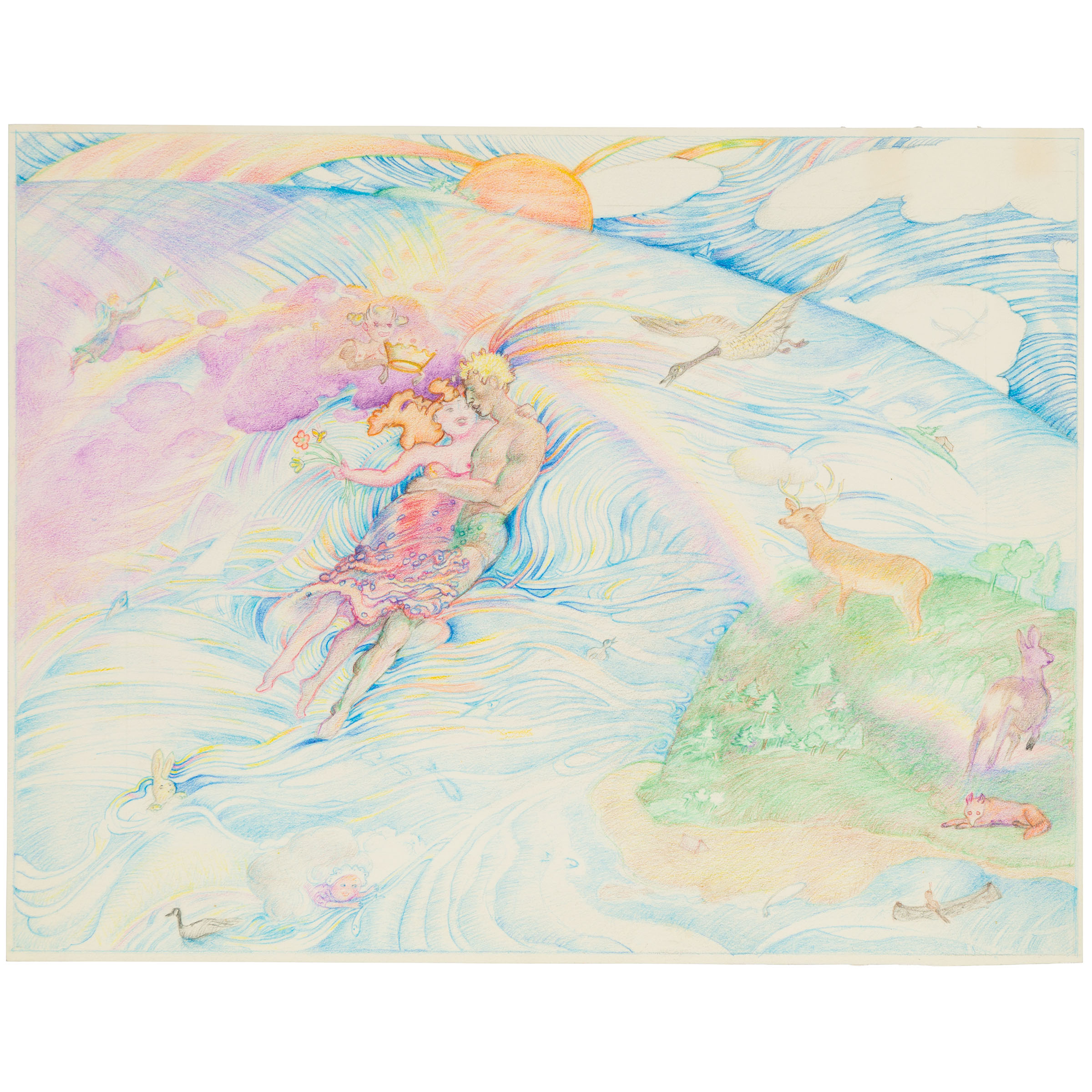 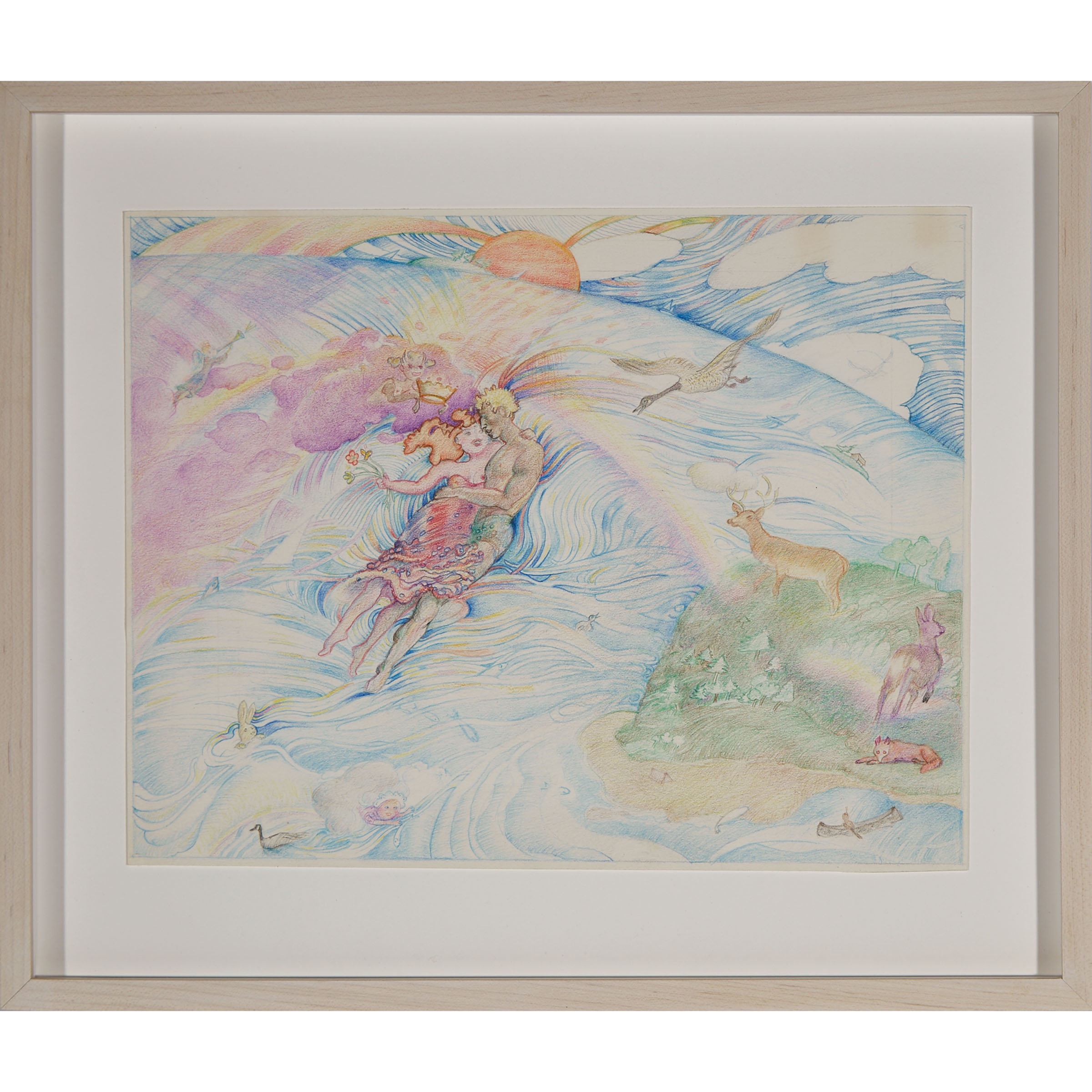 This lot is accompanied by a note from the artist on personal stationary, "Jim Loves The Slide | This is our best one so far | Best Wishes, Joyce"

Joyce Wieland produced at least two Expo Pavillion [sic] drawings in 1984, both of which are reproduced as scans from Wieland’s personal slide archive on the Centre for Contemporary Canadian Art website.1 One of these is the consigned coloured pencil drawing of two lovers amidst a wash of idyllic Canadian wilderness. In the note accompanying the consigned drawing, Wieland comments that the slide reproduction – which she likely submitted to an organizing committee for Expo ’87 – “is our best one so far.”

No published writing on Wieland currently acknowledges this drawing (ostensibly one of a series). The 1986 World Exposition on Transportation and Communication, or Expo ’86, was the second exposition to be held in Canada after Expo ’67, and celebrated Vancouver’s centennial. Wieland’s inclusion in plans for the Canadian Pavilion would have been likely, given her reputation for witty and perceptive celebrations of the nation since her rise to fame in 1967. She was the first female artist to be given a solo retrospective at the National Gallery of Canada (True Patriot Love, 1971) and the Art Gallery of Ontario (1987).

During the first half of the 1980s Wieland’s career as a visual artist (as opposed to an experimental filmmaker) was relaunched. Bloom of Matter Spring, her 1981 solo exhibition at the Isaacs Gallery in Toronto, featured delicate yet rhapsodic coloured-pencil drawings variously described as “sex poetry,” teeming “with interior mythological and allegorical life,” and rejoicing in an “apotheosis of the erotic.”2 Wieland had begun creating intimate ovoid and circular drawings in which she celebrates her love of nature through female sexuality in 1979. The consigned Expo Pavillion drawing is rectangular, but the curve of the earth is captured along the top with an ocean view recalling Wieland’s beloved memories of Newfoundland, where she and her husband, Michael Snow, spent many summers. Familiar characters appear: the ecstatic woman (possibly Wieland herself), her aesthetic lover, the stag (with which she associated the painter, Tom Thomson) seen atop the seaside cliff, and a Canada Goose honking a national cheer.

“World in Motion – World in Touch,” as Expo ’86 was themed, intended “to expose avant-garde artists to large audiences” in the flagship Canadian pavilion, located in Vancouver’s busy harbour.3 But many plans fell short when Christopher Wootten, the original Expo programming director was fired and approximately “$7 million “was trimmed from the budget for the entertainment program.” The cuts meant the cancellation of an art gallery and an exposition “embarrassingly short of visual art…”. Wootten and his visual arts consultant, Luke Rombout (the former director of the Vancouver Art Gallery), had planned a fine arts pavilion which was subsequently reserved for cabaret performances. In the end, Rombout succeeded in arranging only two exhibitions: Ramses II and His Times from the Cairo Museum and The Spectral Image, featuring holographic work by Wieland’s then ex-husband, Michael Snow.

We thank Professor Anna Hudson, Graduate Program Director of Art History & Visual Culture in the School of the Arts, Media, Performance and Design at York University, for contributing this essay.