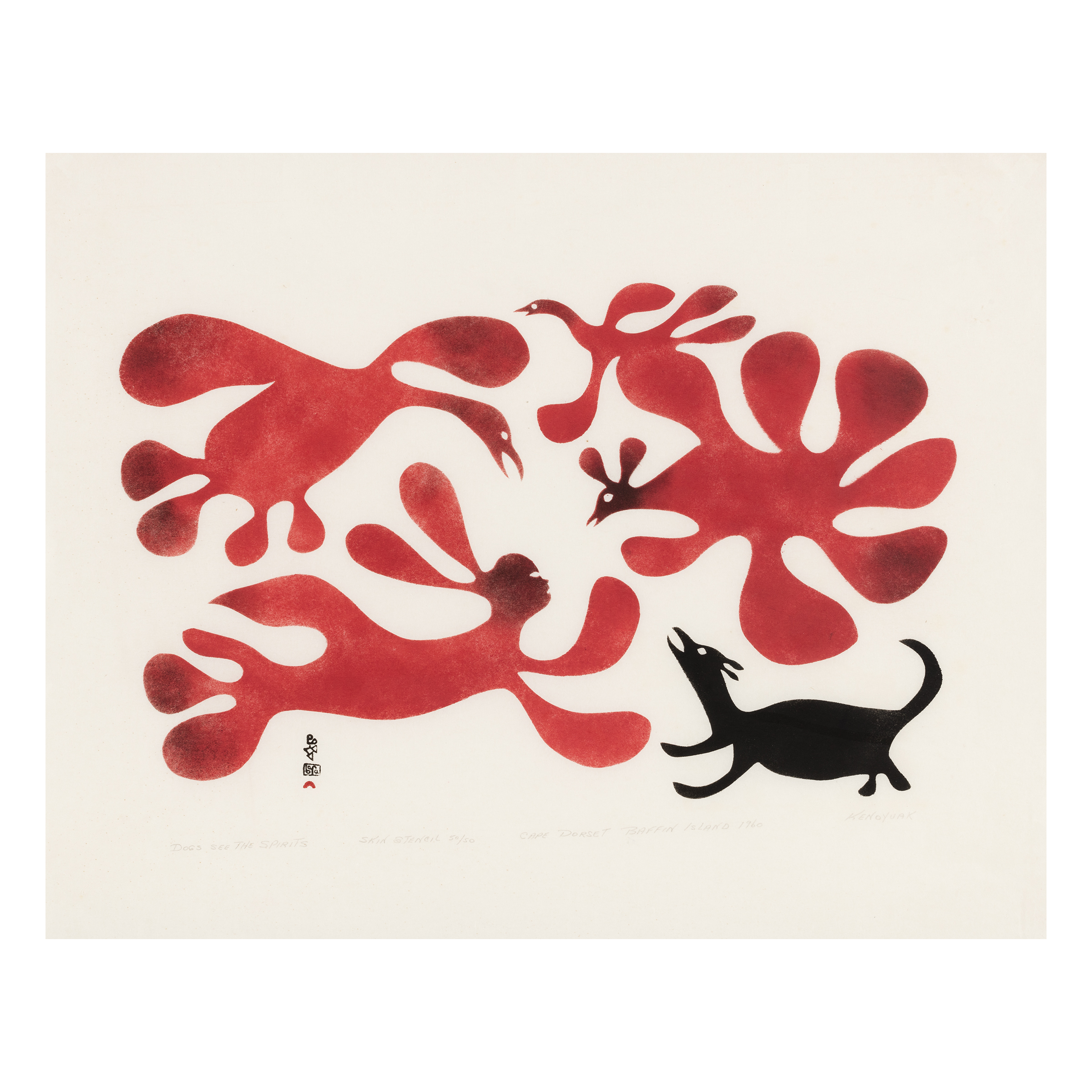 With the exception of the Inuit sea goddess (known locally as Taleelayu) Kenojuak did not often portray myths or legends in her work. However early in her career she created numerous images that have supernatural or shamanistic content.

Kenojuak was probably the first woman to take up drawing in Cape Dorset, in 1957 or 1958. No doubt spurred by the success of her first print Rabbit Eating Seaweed of 1959 (based on her sewn sealskin bag), Kenojuak utilized her design and sewing skills by making and arranging patterns to help her imagine and create new ideas and shapes. As Jean Blodgett noted in her important book Kenojuak (Mintmark/Firefly, 1985), this technique is clearly evident in Dog Sees the Spirits, one of this artist’s most enchanting and beautiful images. It could be argued that 1960 was the creative year for Kenojuak. Her imagery was as varied as it was spectacular; it included emblematic works such as The Enchanted Owl and The Woman Who Lives in the Sun (Lot 15), as well as lyrical masterpieces such as Complex of Birds, Bird Fantasy, and Birds from the Sea.

We can just imagine Kenojuak laying out and switching around her stencils until the outlines of the spirit figures reached dreamy perfection. The interplay of positive and negative shapes is almost magical as our eyes move effortlessly around the lazily meandering contours. The young printmaker Kananginak created marvelous pulsating stenciled effects that absolutely suit the image; the ethereal forms of the spirits contrast beautifully with the more crisply rendered figure of the barking dog.

References: this famous image by Kenojuak is illustrated in Ernst Roch ed., Arts of the Eskimo: Prints (Signum/Oxford, 1974) p. 35.

*Note: This print is officially titled Dog Sees the Spirits, but a few copies (including this one) were inscribed as shown. Interestingly, the “error” shades but does not fundamentally change the meaning of the work.