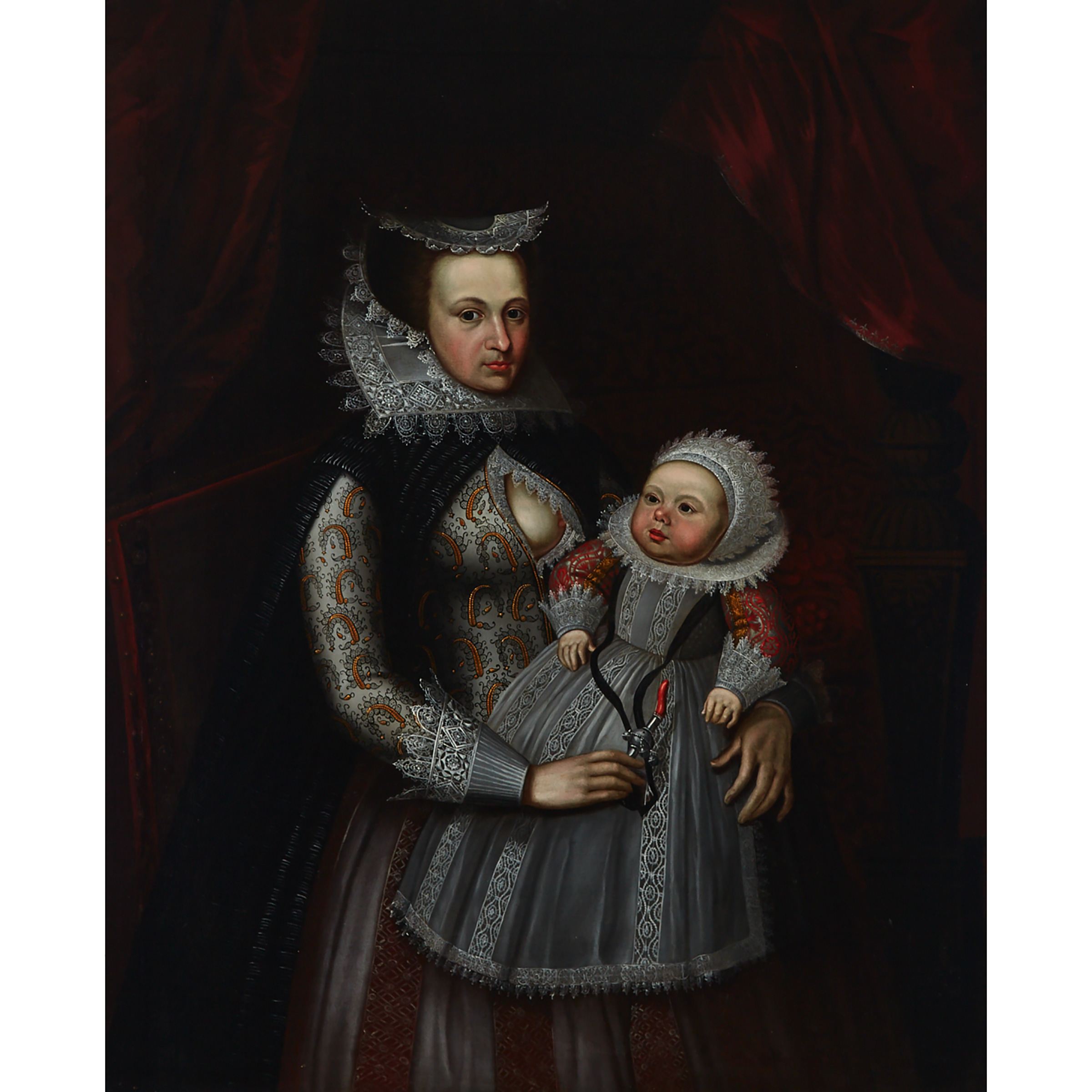 Oil on canvas; given to the artist “Jansen” (Cornelis Janssens van Ceulen (1593-1661)) on the old, handwritten label headed with the above title signed by a descendent of the Ferrar family verso. Contained in a period 17th century carved Nordic white pine frame, made by a master carver (possibly French).
51.5 x 42.5 in — 130.8 x 108 cm 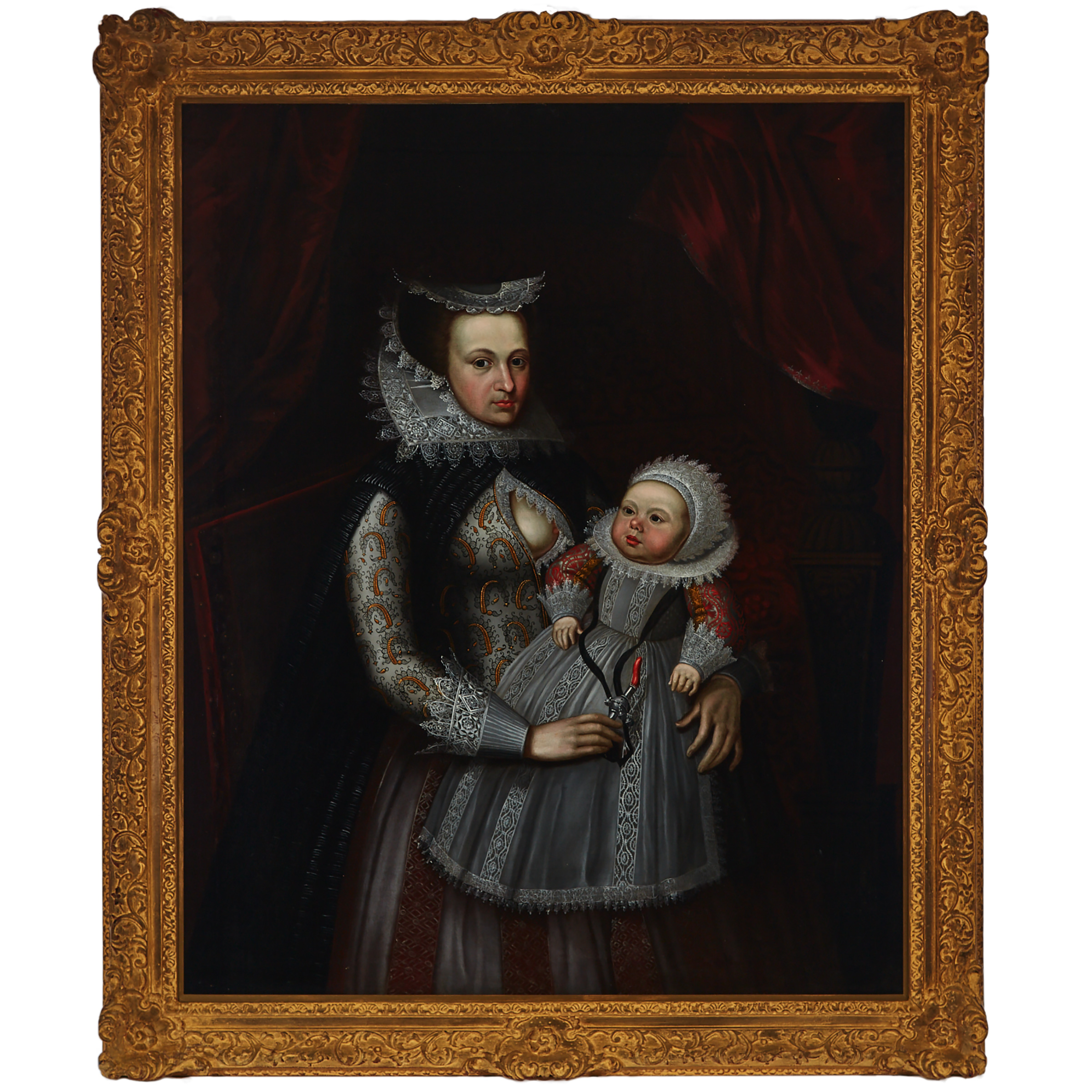 According to an undated, handwritten letter from Emma Johnston, a descendent in the UK, that is disjointed with indistinctly written passages, writing to Nicholas Ferrar Davidson (who was gifted the portrait on July 23, 1908), she recollects that the painting came from Magdalene College, Cambridge. She also states that copies of the original were made;
Reportedly purchased from Magdalene College, Cambridge;
With Rosetta Ferrar, the last of the Ferrars of Little Gidding, England;
Married Capt. George Cheyne R.N. and emigrated to New Brunswick, Canada in 1836, presumably with this portrait (with a partial 19th Century London shipping label to the frame verso);
With relative: “L. Hughes” (Aunt Lyle Hughes) until November 1873;
Gifted by L. Hughes as inscribed in pen and ink to another old label: “This picture was given to Jane Marion Cheyne by me (L. Hughes) November 1873;
Gifted by Jane Marion Cheyne (Mrs. Jane Marion Wilson) to nephew Nicholas Ferrar Davidson on July 23, 1908, as inscribed on handwritten pen and ink label verso naming the sitters it is believed to depict, in the title given above for this lot ;
By descent to his daughter, Carol Davidson, Toronto until 1962;
Her Estate in 1962;
To Ottilie Ketchum, Port Hope, ON (her son Nicholas, named after their distant Ferrar relative);
Her Estate, 1989;
By descent to present Private Collection (remaining with the Ferrar family line), Cardinal, Ontario in 1989

Historically believed to be a portrait by Dutch artist “Jansen” (Cornelis Janssens van Ceulen), leading experts of Tudor portraits in London, England today, suggest this portrait is likely a late 17th or early 18th Century copy in the manner of Flemish artist, Paul Van Somer. In 1976, the Art Gallery of Ontario suggested that “the canvas might be of the period around 1620 to 1650”. Based upon the style of the costumes, it could be dated somewhere in the earlier end of this date range, between 1610 and 1620.

Nicholas Ferrar was born in London on 23 February 1592, the third son and fifth of six children of Nicholas Ferrar senior and his wife Mary (Woodenoth) Ferrar. The Ferrar family was quite wealthy and was deeply involved in the London Virginia Company, which had a Royal Charter for the plantation of the colony of Virginia. His family home was often visited by figures such as Sir Walter Raleigh and Sir Francis Drake.

In 1625, following a successful career as an academic, courtier, businessman and Member of Parliament, Ferrar, his widowed mother and older brother John, purchased an abandoned church and property at Little Gidding in Huntingdonshire. Their purpose was to found a protestant religious community. The extended family and household – about 30 to 40 people – moved into the manor house, and Nicholas became the leader and spiritual director of the community. This was the only religious community in the Church of England between the Dissolution of the Monasteries under Henry VIII and the revival of religious communities that came with the Oxford Movement in the 19th century. The household was centred on the Ferrar family and their children: Nicholas’s mother Mary; his brother John and his wife Bathsheba; and his sister Susanna and her husband John Collett.

The community attracted much attention and was visited by King Charles I. He borrowed a Gospel harmony produced at Little Gidding and only returned it several months later in exchange for a promise of a new harmony to give to his son, the future Charles II. The Ferrars then produced a beautifully bound manuscript that passed through the Royal collection and is now in the British Library

It’s not clear exactly who is depicted in this portrait. While the verso label, handwritten by a later descendent of the family, identifies them as Mary Ferrar and her son Nicholas, the portrait may also depict other ancestors. Other possible identifications could be the sister of Nicholas Ferrar, Susannah Collet; or Bathesheba, wife of John Ferrar, and her son Nicholas Ferrar Junior (b.1620 - d.1640).