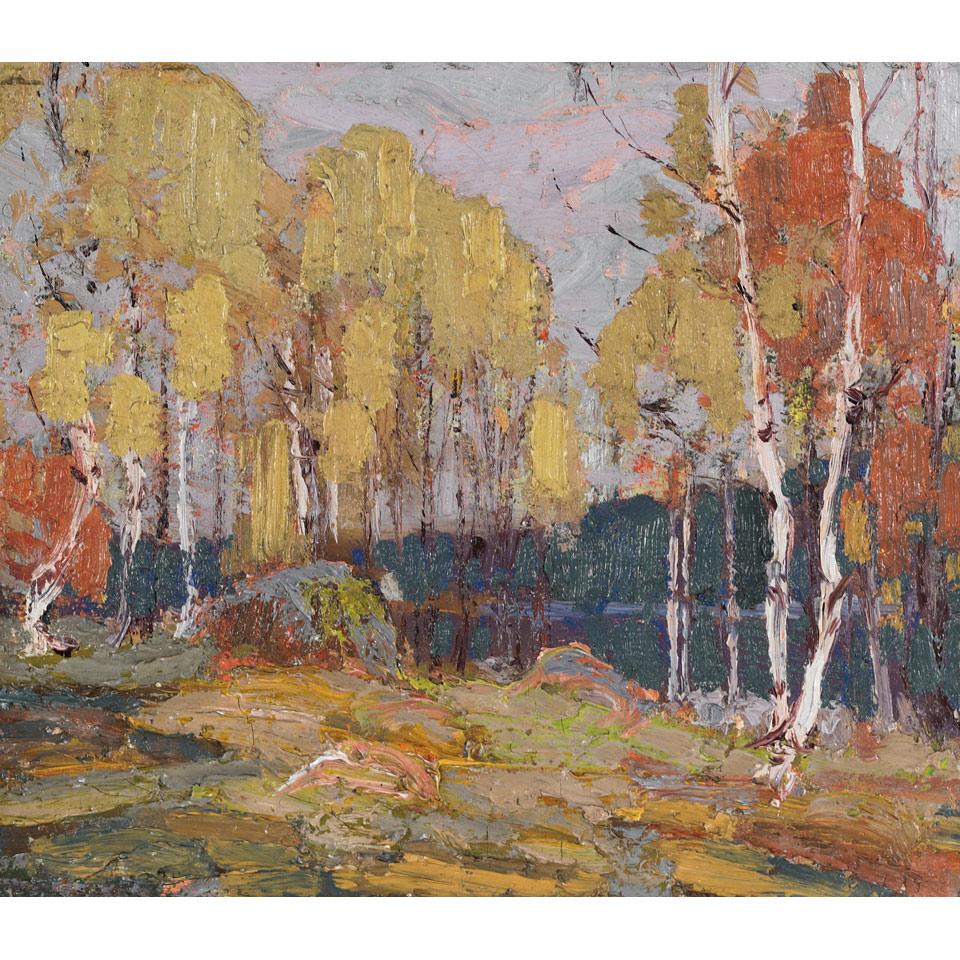 Dr. George D. Garland, O.C. (1926-2008) was born in Toronto and was a Professor of Physics at the University of Toronto. In 1984 he was appointed to the Order of Canada for his research in geophysics. The year book, Torontoensis, mentions Dr. Garland’s love of being out in the bush. According to his daughter, Dr. Garland built his first cabin when he was in his early 20’s. His cottage on Smoke Lake in Algonquin Park remains in the family. In 1989, The Friends of Algonquin Park published a book entitled Glimpses of Algonquin: Thirty Personal Impressions From Earliest Times To The Present which was compiled by Dr. Garland. A memorial service celebrating Dr. Garland’s life was held by The Friends of Algonquin Park in June, 2008.

This painting will be included in Joan Murray’s forthcoming catalogue raisonne of the artist’s work.

After working in Georgian Bay during the spring and summer of 1914, Thomson was anxious to return to camping in Algonquin Park. In the fall of 1914, he did just that, along with his friends A.Y. Jackson, Arthur Lismer and Fred Varley, and also accompanied by Lismer and Varley’s wives, Esther and Maud, and Lismer’s young daughter, Marjorie. During this season Thomson painted the land he traversed and the fall colour. Algonquin Park was a perfect subject for him and he delighted in it. As he wrote his friend and patron Dr. J.M. MacCallum, “We are all working away but the best I can do does not do the place much justice in the way of beauty.”(1) The day before, Jackson had written their mutual friend J.E.H. MacDonald about the way Thomson was plastering on the paint and getting fine quality, although he warned, cantankerously, “there is a danger of wandering too far down that road.”(2)

While painting Algonquin Park, Thomson studied the birches with their shapely crowns and deep yellowish-green foliage. Faced with the challenge of producing a striking design while characterizing the special qualities of the Canadian north, he looked at the contrasts offered by the colour of the leaves, distant hills and sky. Thomson made the painting Fall Woods, Algonquin Park in the early morning, capturing the luminous lavender and pink glow of the sky and the way light falls on a patch of land before him, marking the strong form of rocks and trees, giving them meaning. To depict this moment of calm, he used a fully-loaded brush and roughly textured paint to capture the scene. The composition in which the foreground rises slightly to one side, along with the far horizon which is viewed through a screen of trees, cuts the panel into parts on the diagonal and recalls a composition he had used before – it may have been inspired by a sketch Jackson painted earlier in the year. Thomson likely painted the verticals of the trees first, then laid in the sky, hills and foreground. He would have added a few last touches to the slender trunks of the trees and indicated the delicate tree branches. The palette is similar in its rich colouration and heavy impasto to other sketches Thomson painted that fall, although in this sketch Thomson added a curving sapling to the hill at the left. Since the work indicates that there was still colour to the maples (they appear at either side of the sketch), it likely was painted shortly after Thomson arrived in the Park. On October 6, he wrote MacCallum that “just now the maples are about all stripped of leaves.”(3) The work of Thomson this fall surpassed his peers in its vivacious use of high-keyed colour. His use of layering as in the sky and foliage also animates the effect. He found “happy colour motives amid tangle and confusion…,” Jackson wrote later.(4) Sketches such as these point to the exciting new direction Thomson’s work had taken in 1914; they indicate his new way of painting nature which he conceived as a harmony, an integrated whole, one he would use in the future with great freedom of design. The overall effect of this sketch is of an eloquent symbol of Canada and the autumn woods that fall.

We would like to thank art historian, Joan Murray, for contributing the foregoing essay.