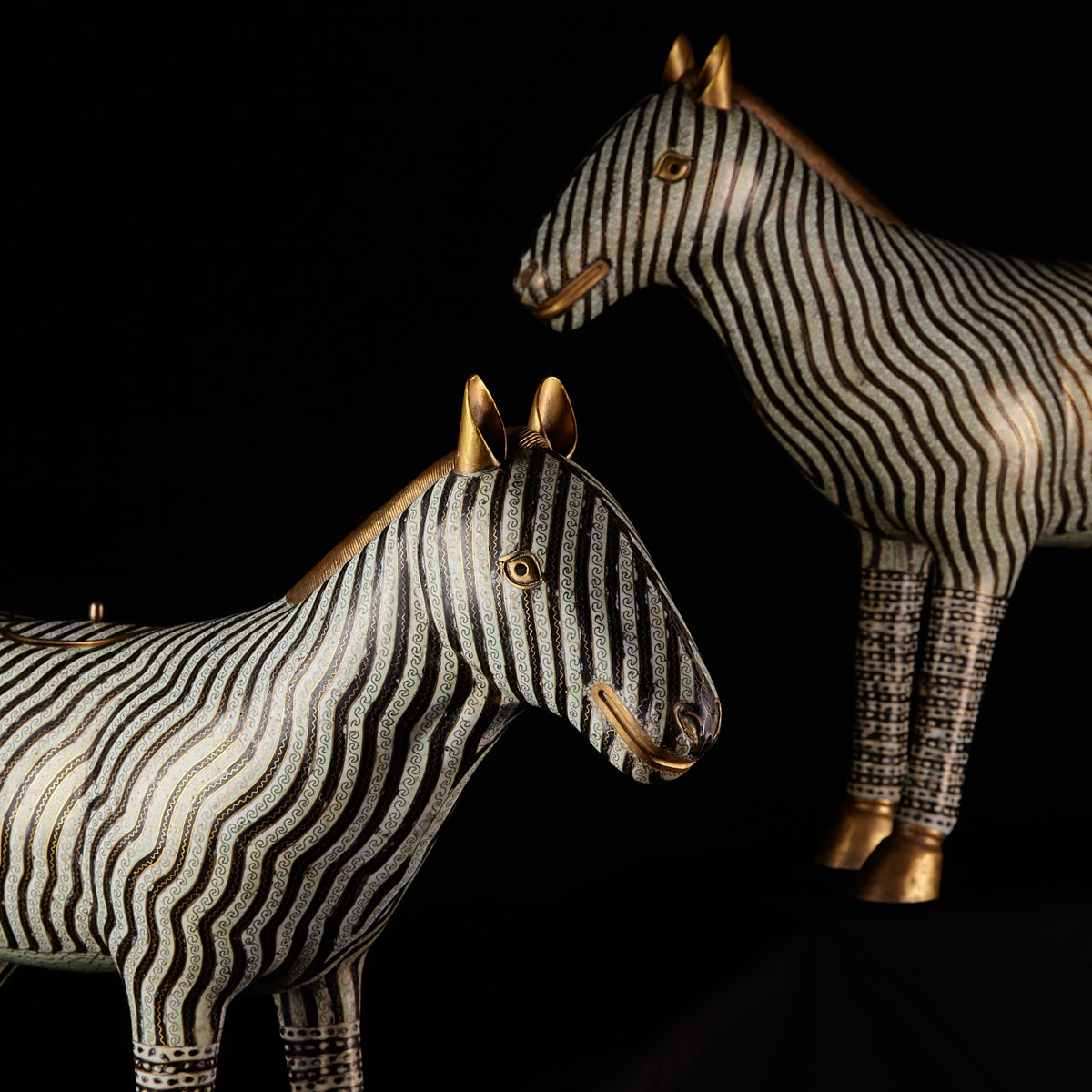 Each naturalistically modeled and standing fore-square, the body with alternating stripes of black and white to seafoam ombré, divided by gilt wires and further inlaid with scrolling wires, the legs and tail with horizontal black and white stripes, divided by gilt wires and detailed with contrasting enamel dots, the underbelly of seafoam green enamel and inlaid with wavy gilt wires, the ears, facial features, hooves and tip of the tail of separately cast gilt, with a fitted cover to the back of each, tail is detachable
height 25" — 63.5 cm.

Zebras Reach China
The introduction of zebras to China and the Chinese people was met with tremendous excitement and great awe. Zheng He, a Hui court eunuch, mariner, explorer, diplomat and fleet admiral, rose to prominence under the Yongle Emperor. Between 1405 and 1433, he executed seven expeditions known as the Treasure Voyages, which were diplomatic, militaristic and commercial in nature. To protect China’s established position of prominence, the fleet was stocked with valuable goods for trade, which also functioned as material representations of Chinese power. The fifth voyage set off from the Chinese coast in the autumn of 1417, and reached Champa, Pahang, Java, Palembang, Malacca, Semudera, Lambri, Ceylon, Cochin, Calicut, Shaliwanni (possibly Cannanore), Liushan (Maldive and Laccadive Islands), Hormuz, Lasa, Aden, Magadishu, Brava, Zhubu and Malindi. Goods were exchanged with local peoples, and the fleet eventually returned to China on the 8th of August 1419. To celebrate the homecoming, ambassadors were received at the Ming court and presented with the tribute, including lions, leopards, dromedary camels, ostriches, zebras, rhinos, antelopes and giraffes. While each of these exotic animals caused a great sensation, it was particularly the appearance of zebras and camels that elicited responses of disbelief. Initially termed kylin (African giraffe) and Fulu (zebra), these creatures became decorative animals within the Chinese imperial garden and began appearing in artistic works.

From an Important Toronto Collection