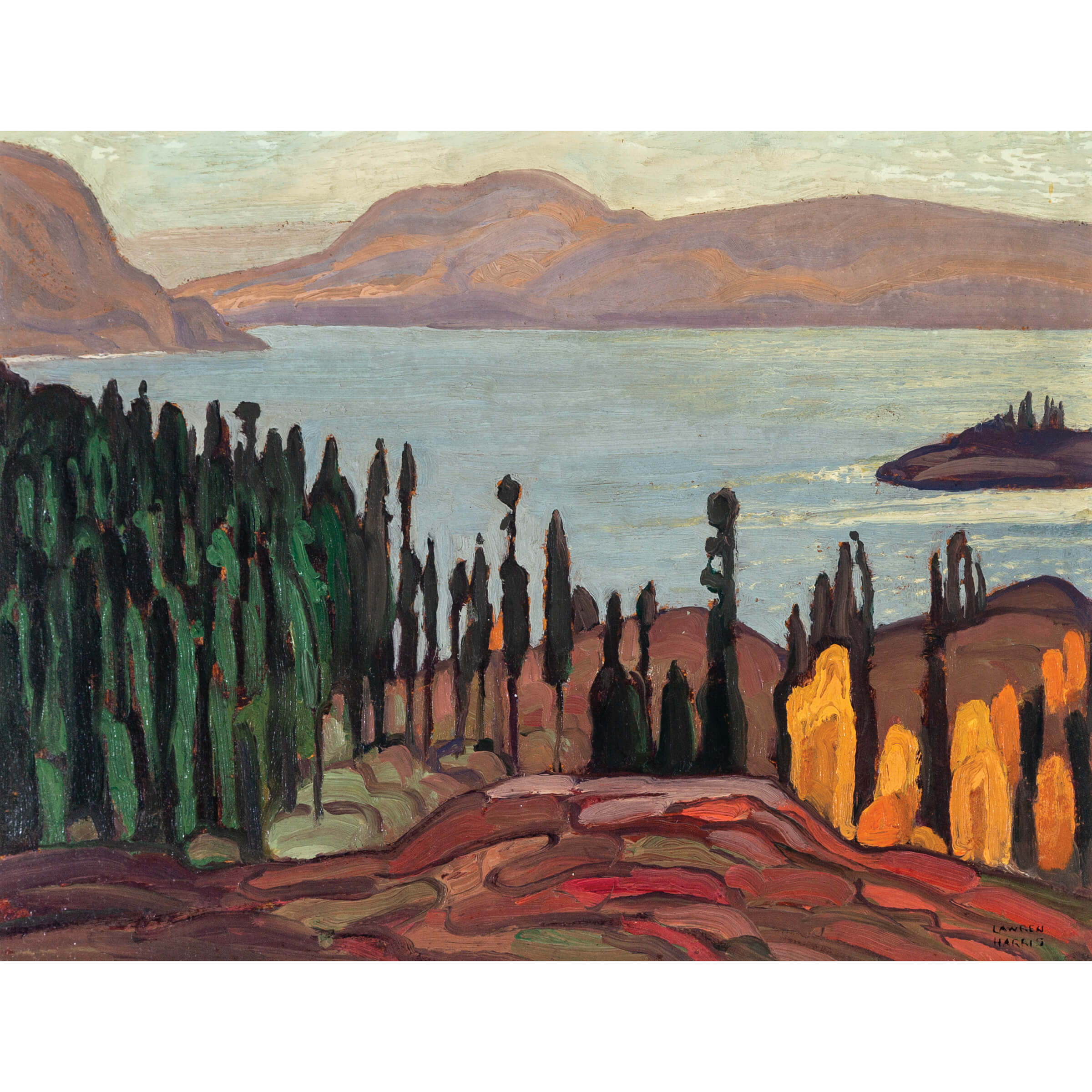 Lawren Harris’s first trip to Algoma in May 1918 occurred soon after he was discharged from service, and following the death of his brother, Howard. His friend, Dr. MacCallum, suggested the trip as an antidote to the depression from which Harris was suffering, a symptom of PTSD. Harris traveled to Algoma many times beginning with that first trip with MacCallum in 1918, then several more times in the company of MacCallum. JEH MacDonald, Johnston, Jackson, Lismer and others, in a specially kitted out box car that he had arranged to use as their accommodation and transportation.

In 1921, after visiting Algoma, Jackson and Harris decided to push on to the north shore. Ian Thom notes: “the greater visual openness and spatial freedom appealed to Harris, and he added this site to his repertoire.” The experience was pivotal; Harris began to redirect, resulting eventually in some of his most enduring images, such as North Shore, Lake Superior, 1926 or the Pic Island subjects. The interim works produced during the initial phase of this watershed moment, works like this lot, are themselves extremely poetic and are important records of the swerve Harris made away from Algoma and towards Lake Superior. Dennis Reid provides us with a clear understanding of where Morning Sun fits in the chronology. Reid writes that in 1922 “Harris and Jackson went again to the north shore, camping at Coldwell during the first week of October. They stayed only about a week. In 1923, Harris, Jackson and, apparently, Lismer, went back to the Coldwell area for almost a month. They camped for a while at Port Munroe ...leaving for Toronto on or about 20 October.”

Like a page poised to turn before the plot twist is fully revealed, or the fall of a curtain at the entr’acte, Morning Sun, Port Munroe punctuates a critical and exciting moment in the story of Lawren Harris’s progress – the transition between Algoma and Lake Superior which this painting reflects quite literally. The foreground is rich with the lush and densely packed vegetation associated with Algoma; the background softened to a dreamy suggestion of barren floating islands; the middle ground a space to forge – a lake that bridges, or interrupts, the distant goal, a lake in which we will either sink or swim. Increasingly, works after this point would become increasingly stylized.

Thom acknowledges Harris’s interest in the spiritual in art. Speaking of the northern paintings, he writes: “By his reduction of incidental detail (clearly, there is more than atmospheric perspective at work in Morning Sun), the purification of his palette and tonal range, and more importantly, the use of light in these images, Harris began to move his art away from landscape and toward a more spiritually oriented painting. Morning Sun serves as a poignant example of Harris’s early consideration of this move towards a new emphasis on the spiritual.