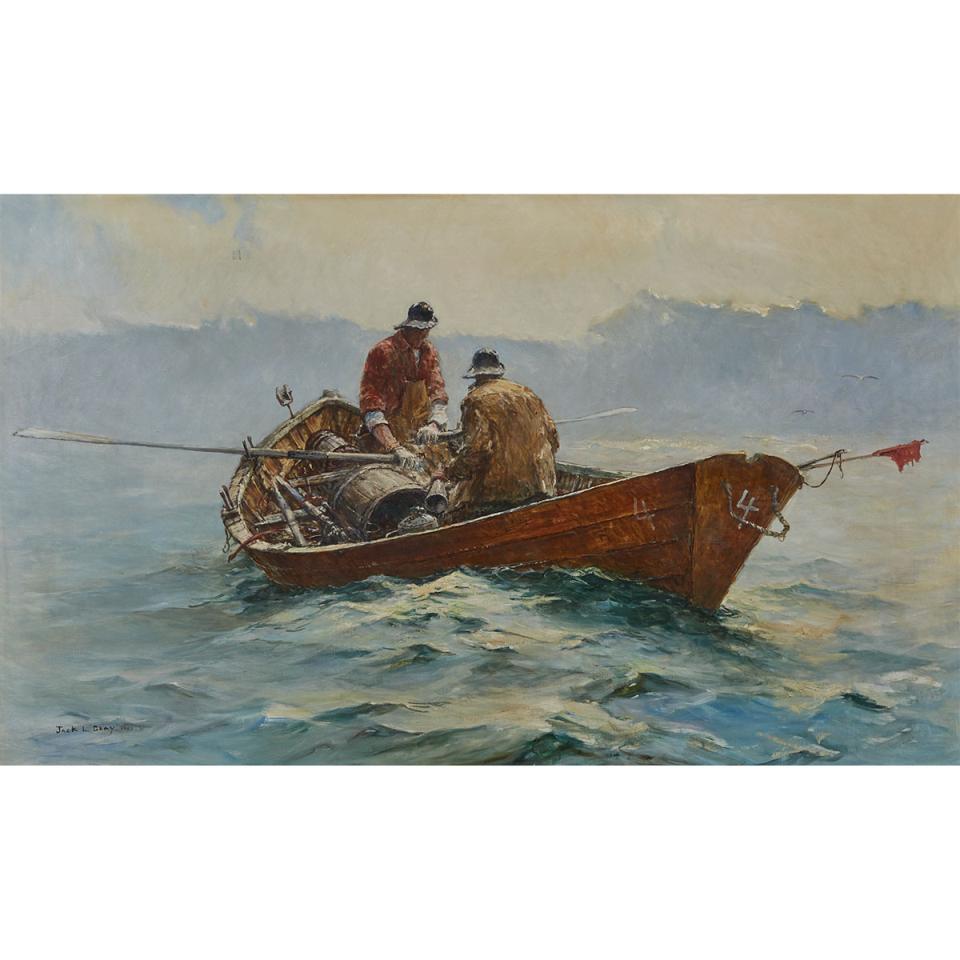 Jack Lorimer Gray was born in Halifax, Nova Scotia to Scottish parents. His talents as an artist were recognized by Sir E. Wyly Grier while Gray was still a child. He attended the Nova Scotia College of Art for one year in 1948 but left to work on fishing boats. His first major solo exhibition was at the Hackmatack Inn in Chester, Nova Scotia in 1948. Gray studied life drawing with Arthur Lismer at the Montreal Museum of Fine Arts. He was an excellent sailor which is reflected in his paintings of fishermen, boats and the piers and buildings of the waterfront.

The consignor’s family had a business with offices in Montreal during the 1940s where their grandfather spent a lot of time. The grandson states that his grandfather knew the artist and commissioned two other paintings.

One painting is a street scene in Old Quebec looking up at the Chateau Frontenac and Cathedral. Based on the cars, sleighs, the figure’s dress and the streetscape, it appears to have been executed in the 1940s. It is the family’s understanding that Gray was asked to do a "Quebec painting" for their  grandfather.

The consignor states that his grandfather also commissioned Gray to paint a scene of dory fishermen in St Margaret’s Bay that featured his grandfather’s summer home on the distant shoreline in the background.

This lot was not commissioned. In this impressive canvas, the fishermen are looking at what appears to be a large wave in the distance coming toward them.

In the mid 1950s Gray moved to New York City and initially painted boats in Flushing Bay. By the 1970s, Gray had many exhibitions of his works throughout the world. Although he painted on pre-made canvas board for some of his early works, he did hand-stretching of double-primed canvas for the majority of his output. All of his oil paintings have an inscription on the back about the location of the scene depicted, often in considerable detail.

With the Confederation Art Gallery and Museum, Charlottetown, Prince Edward Island label verso inscribed No. “15” (in a circle) and No. “29” in pen and ink to the label verso