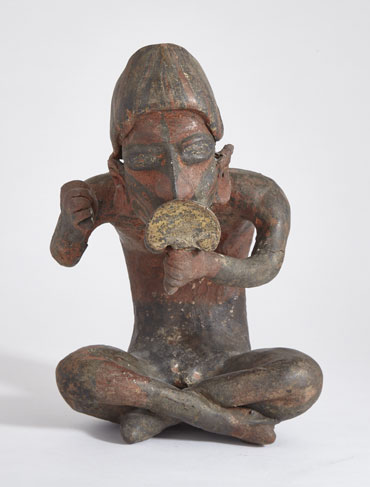 Comprising Pre-Columbian and modern Central and South American ceramics, sculpture and textile work, this collection showcases art and artefacts from a broad range of ancient and contemporary cultures. Many of the objects are from the well-known collections of Alan Lapiner, Nathan Cummings, Bruno J. Wasserman-San Blas and Nelson A. Rockefeller, and have been included in exhibitions at the Metropolitan Museum of Art and related publications.

The auction includes three excellent Mochica stirrup spout vessels, products of a culture which flourished in northern Peru between 100 B.C. and 800 A.D.. These ceremonial vessels, painted with scenes from nature and stylized figures, provide fascinating insight into the religious and social lives of the Mochica people. Centuries later, the Chimu culture developed in the same region of Peru and continued to produce similar vessels. Included in this sale are examples of their black and grey wares, produced in large quantities between 1000 A.D. and 1400 A.D., that demonstrate how technological developments in ceramic production and artistic ideas were passed from one culture to another.

One of the most impressive pieces in this online auction is the Mayan Polychromed Cylinder Pot, late Classic Period, 600-800 A.D.. The painted surface demonstrates the high level of skill that Mayan artists possessed, and its elaborate detail suggests that it may have been a funerary offering for an elite member of Mayan society. The relationship between life and death was of ongoing importance in the visual arts of ancient Mesoamerica. The Nayarit figures from Mexico depicting a diseased male and a female in birthing position likewise illustrate an interest in the cycle of life. Like the Mayan Cylinder Pot, these objects were recovered from burial sites, and thus belong to a long tradition of funerary art in Central and South America.

The collection also contains many stone pieces, an essential material used for both utilitarian objects such as axe heads and grinding stones, but also in fine art, exemplified in the Standing Male Figure and Jaguar Form Metate from the Guanacaste Nicoya Peninsula, 800-1200 A.D.. Other tools such as whorls and loom posts reveal less about the complexities of social life, but nonetheless broaden our understanding of everyday activities in the ancient world such as textile production.

Moreover, the 20th-century objects in this collection are unique, essentially blurring the boundaries between past and present. Modern indigenous Peruvians have recreated the decorative arts of their ancestors, creating Chancay type fabric dolls with textile fragments recovered from ancient tombs while modern Shipibo potters draw artistic inspiration from Pre-Columbian vessels. The collection as a whole represents the diversity of Pre-Columbian art, and includes both typical and unusual works from a range of cultures, time periods and geographical areas.

Waddington’s is pleased to offer these objects in a timed online auction through Invaluable.com ending February 4, 2016.