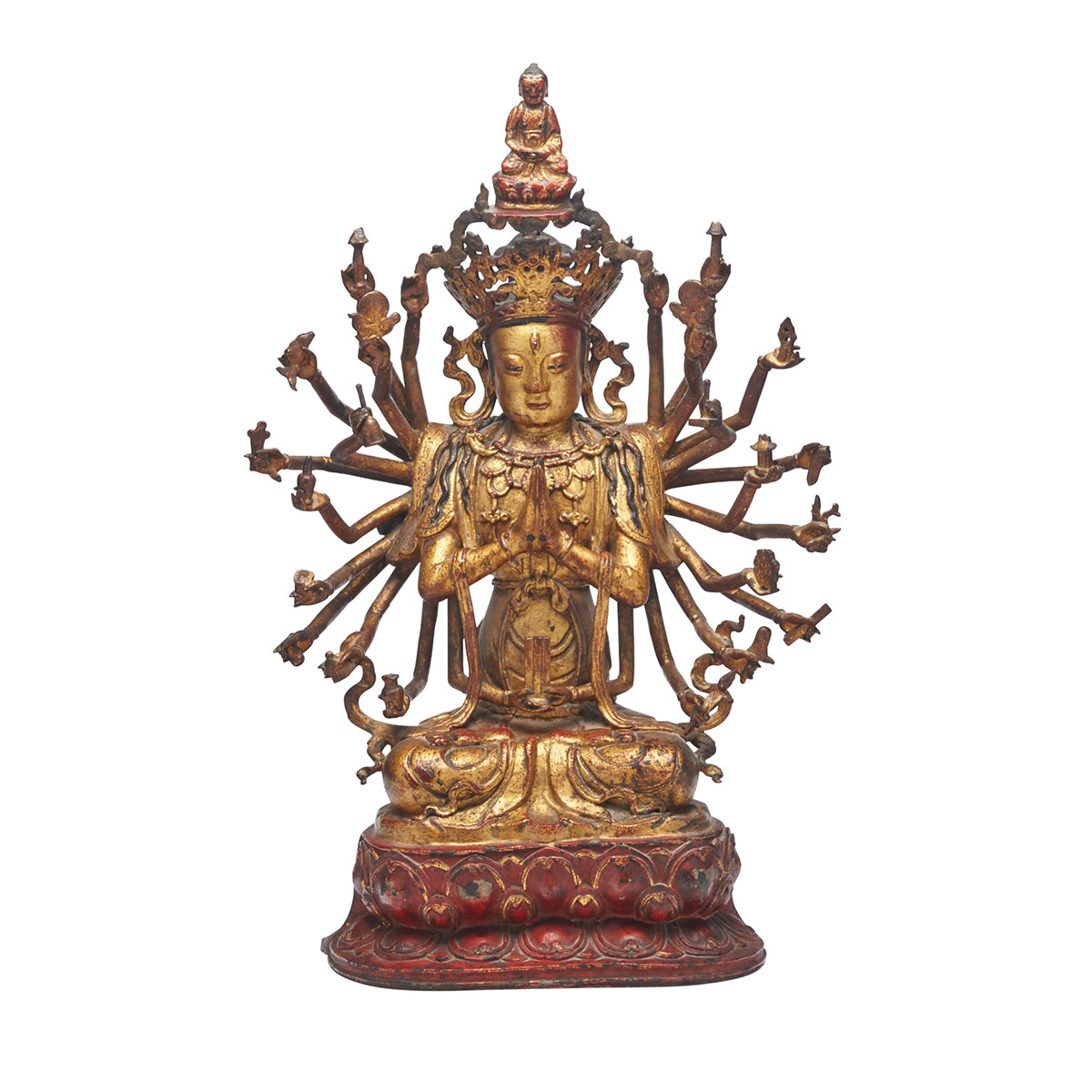 Seated in vajrasana on a double lotus pedestal, with the main pairs of hands held in anjalimudra, high chignon, benevolent expression, the elongated uppermost hands held upwards supporting a Buddha, below a seven-leaf diadem modelled with twelve pairs of arms, each hand holding a ritual object including a reliquary, a ritual brush, a mala pearl, ceremonial dagger, ambrosia vase, Wheel of Law, bell, lotus, and other ritual objects, all raised to the sides and a further pair of arms held in front holding a chaojian
height 33.3" — 84.5 cm.

Adorned in typical Han-Chinese robes and wearing an elaborate crown, the current example of the 'thousand-armed' Avalokiteshvara is a rare Daoist depiction of a Buddhist bodhisattva. Surmounted by a small figure of Amitabha Buddha (which is missing on many known examples), the well-cast figure represents the Daoist manifestation of the Buddhist deity of wisdom and mercy. His iconography is also characterized by the 24 long, spindly arms radiating from the slender body. One of the most revered deities, the 'thousand-armed' Avalokiteshvara was the earthly depiction of Amitabha Buddha and venerated as the ideal of karuna, the concept of compassion.

During the 15th Century of the Ming Dynasty, Daoism and Buddhism encountered a cross-pollenization of ideas. At that time, the Tibetan Gelug School of Buddhism was founded. In consequence, Han-Chinese Buddhism gradually became the mainstream religion in the Imperial court, surpassing Mongolian Buddhism. In the Yongle and Xuande periods, Tibetan Buddhism became the most prominent religion in China, a fact that was reflected in the Imperial bodhisattvas workshops, known as the ‘Fozuo,’ (the literal Chinese to English translation is ‘workshop of making bodhisattvas’). Owing to the emperor’s religious preferences, Buddhism influenced the majority of bronze figures made in the ‘Fozuo’.

16th Century Daoist-Buddhist bronzes such as this present example are extremely rare. The proportions of his body depict a transition of style between Daoist and Buddhist vocabulary, which is showcased by the 28 arms, seven-leaf diadem, and slender waist. These transitional characteristics bear pivotal historical meanings and support his influence from the early Ming Period. For a comparable example of this figure dated to the Ming Dynasty (but probably 16th Century), see Christie’s Hong Kong, May 27, 2009, lot 1951.

The Estate of Harry Handel (1916-1972), owner of Everyman’s Bookshop in Montreal. Purchased during the 1950’s at the Gurie Gallery, thence by descent within the family.