Being descended from artistic royalty, you’d be forgiven for having a bit of an ego.

But Jason Henry Hunt is the very opposite—down to earth, expansive, generous—and you can feel it even through the computer screen that beams him in from his studio on the northern tip of Vancouver Island. His family has produced some of the greatest Northwest Coast artists—generation after generation. Hunt is the son of Stan Hunt, grandson of Henry Hunt, and great-grandson of Mungo Martin. Think of it like Picasso fathering a second Picasso who then fathers another Picasso—and throw in a bunch of top-level Picasso-esque brothers and uncles too—an improbable amount of talent coursing through the family tree without missing a beat.

Of the legacy he was born into, Hunt explains: “my family is still teaching me. Grandpa has been gone since I was 10, and obviously I never worked with him directly. But he still inspires me, and I still learn something from him every day.” Hunt tells me he wanted to be a carver since he was a child playing in the wood shavings of his father’s studio, but shied away in his teens, worried about filling such giant shoes. He instead enrolled in business school. When he began looking for work after his third year of school, he found himself drifting into the studio, preferring to carve with his father than hand out resumés. Business school was soon abandoned.

Starting out, Hunt had to pitch his work to local galleries door-to-door, carving by carving. You’d be forgiven for assuming that an artist from a great dynasty would have an easy go of it, but Hunt had to really hustle in his early career, learning the trade and pounding the pavement. He received plenty of rejections—like that time in the late 1990s when he tried to sell a pink-painted mask and got told off by the gallerist for his non-traditional approach. Times have changed—not only do plenty of contemporary artists now use vibrant colours, but Hunt has cemented his place in the artistic firmament. The market for his work is international, with clients in the United Kingdom, Germany and the United States competing with local Canadian clients to commission a piece of their own.

Apart from time in the studio working on his own carvings, Hunt spends about a third of his professional life restoring the work his family has made, travelling around the world to ensure that carvings and totem poles can last as long as possible. Restoration is an art of restraint, requiring a light touch, and when done correctly, allows future generations to enjoy these masterworks. Insect infestations are exterminated, moss gets removed, paint might be reapplied. Wood in bad shape gets cleaned away, and sometimes new wood is grafted on. Hunt is continuously surprised at how well wood from his grandfather’s era has aged despite some harsh conditions—like the pole in California which had been able to withstand a sprinkler pointed at it for years.

In 2010, Hunt and his father were asked to travel to Sunnylands, a 200-acre estate in California to restore a different carving, a 30-foot-tall totem pole carved by Henry Hunt in 1976. Once restored, the pole was rededicated in 2012. The estate’s owners, Walter and Leonore Annenberg, decided to extend Henry’s legacy, and mounted an exhibition of Stan and Jason Hunt’s work, alongside the art of American musician and artist Herb Alpert, who was deeply inspired by Hunt totem poles in the Pacific Northwest. The result was the 2019 show “Reach for the Sky: Tradition + Inspiration”—from which we are pleased to offer two carvings by Jason Hunt.

Of lot 13, “Moon Mask with Orca Design,” Hunt explains that it was a technical challenge he set for himself, to carve a three-dimensional piece out of one single piece of wood, no gluing or add-ons allowed. Typically, the dorsal fin extensions as seen on this mask would have been carved separately and then attached, but Hunt “wanted to make it obvious that it was one piece if you take a good look at it.” Carved from red cedar, Hunt explains that the wood is susceptible to breaking and cracking—meaning it was a real challenge to make his vision a reality without breaking it.

Hunt also explains that masks—even the smaller ones—come from large blocks of wood measuring six or seven feet through. Wood blocks need to be this large because carvers work only with hardwood—which forms the perimeter of a tree. Using hardwood helps to mitigate issues with cracking. When you look at a smaller totem pole or a mask, consider that it is carved using only the periphery of a much larger log.  Finding old growth red cedar that is large enough to use is becoming a challenge for Northwest Coast carvers—’old’ meaning 600+ years—so when nice wood comes along, Hunt notes that “you kind of want to do something challenging with it.”

“Challenging” describes the artform on even its most rudimentary level, which requires both brute strength and manual dexterity. Carving is an unforgiving medium, requiring constant concentration as well as a wide range of specialty skills—from chainsawing to knife-work to painting and design. Time is another factor to be considered, not only with respect to the labour involved, but because wood shrinks as it ages. A red cedar mask can shrink up to half an inch in every direction as it dries, so Hunt must work in stages, constantly projecting forwards in time.

Lot 12, “Multiple Raven Mask, showcases Hunt’s desire to showcase the colour and texture of the natural, unpainted red cedar, as well as his use of contemporary colours. He explains that a traditional Raven mask would use only black, red and white colours, but Hunt added in blues and greens, telling me that “I try to avoid the typical. I still use blacks and reds, but I tend to shy away from it.” Of his style, he categorizes his work as very clean and simplified—much more so than when he first started out—and devoid of extraneous details. He also knife-finishes his work in the traditional way, eschewing the modern use of sandpaper.

Much of what Hunt has learned comes from generations of experience, passed on through members of his family. I ask if he is teaching any young carvers at the moment, and he tells me that apprentices are few and far between. Perhaps it is the sheer amount of physical labour involved, or the long and often frustrating years of training, but new generations are choosing alternate paths. Hunt, at age 48, notes that he and his brother are the youngest full-time carvers in their area.

So what is to become of this great dynasty of master carvers?

“I have a six-year-old daughter, and she tells me she’s going to be an artist with her daddy.”

Previews are available at other times by appointment.

Please note that while a few lots in this auction are located in Toronto, most artworks are located in Vancouver and shipping from Vancouver is the responsibility of the successful bidders. 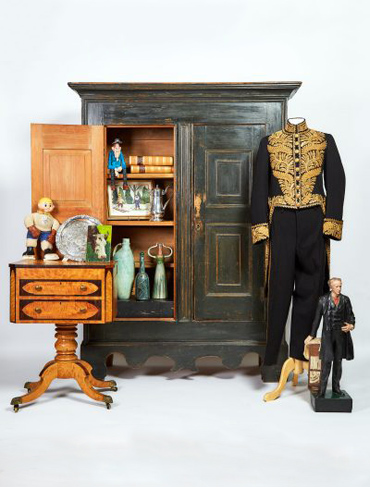