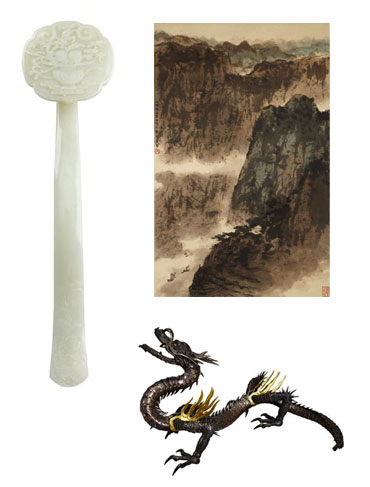 Seasoned auctioneers Duncan McLean and Stephen Ranger had their work cut out for them at Waddington’s December 2, 2013 auction of Asian Art. A full auction room, online bidders and a staff of ten to handle telephone bids contributed to the often frenzied bidding action and sky-high prices at the Toronto auction company’s gallery. The final sale total of $3.11 million, including commission, is a record high for an Asian Art auction in Canada. With a 73% sold rate, the auction more than doubled its $1.05 million to $1.49 million pre-sale estimate, and beat Waddington’s previous high of $2.4 million for an Asian Art sale in December of 2010.

Based on the level of pre-auction interest, Waddington’s Asian Art Specialist Anthony Wu had anticipated that some of the close to 400 items offered might exceed their estimates, but the evening’s success surpassed all expectations. Chinese porcelain, painting and jade carvings were particularly strong, as well as South Asian miniatures and Himalayan bronzes.

It was the Chinese works of art that had the auction room buzzing.

Anthony Wu says it is not surprising that most of the buyers were from East Asia and New York, but noted that the majority of the pieces in the auction were from six different notable Canadian collections.

“We are already assembling our spring auction of Asian Art” Wu said from his downtown Toronto office, amidst the packing as the art is prepared to be shipped to new owners. “We proved once again that top international prices can be achieved here in Canada.It is hugely exciting – and satisfying – to experience such growth in this market and to be responsible for Canada’s most significant auctions of Asian Art.”